Searching Hard for the Daily Outrage

False outrage, that is.  According to the Daily Caller,


Multiple journalists circulated a conspiracy theory on Twitter that a document from the Department of Homeland Security contained a Nazi code Thursday.

The outrage?  A February publication from the DHS with the title "We Must Secure The Border And Build The Wall To Make America Safe Again".  Doesn't sound terribly scary to me.  I've only heard about a million people say that.  Here's the shocking conclusion.  Because that title has 14 words in it, it's a code for Nazis.  Or something.  Because reasons.  I swear I'm not making this up.

Most of what the DC shows are tweets from one twit named Laurie Voss.  It's hard to determine where she works, but I'll grant the DC's summary that she's a journalist.  Her profile picture makes her look old enough to not be writing for a junior high school paper, although it's intellectually at that level. 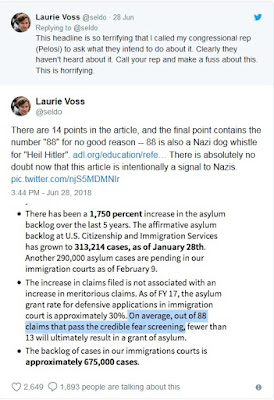 Given what looks to be a survey they quote that has the numbers 13 of 88, they actually used the number 88!! It's Nazi Dog-Whistle for Heil Hitler.  (Listen, Miss Voss, two things: first, when they quote statistics like that, they're not using the numbers for 'no good reason', and second, if you're the only one who hears the Nazi Dog-Whistle, you're the Nazi).  So what is the rest of the world supposed to do with a survey that publishes its results in that format?  Edit the data?  Never publish the number 88 if it ever comes up?

You know, in ham radio, 88 is code for "love and kisses".  Bet she'd never use that alternative.

Not that she has the monopoly on idiocy.  Someone replying to her tweets later named Ishaan Tharoor said "14 Words" itself is neo-Nazi code.  Except the phrase "14 Words" never appears on that DHS webpage.  Laurie Voss says there are 14 points in the article.  Except there are only 13 bullet points.  If she's counting paragraphs, there are 15.

This is pure derangement.  These alleged journalists are so desperate to to find something to be scared about that they make up things.  There really is such a thing as too much.  Anybody who equates anything going on in the DHS with Nazi Germany doesn't know anything about Nazi Germany.  It's like we're living in some bizarro universe where Godwin's law comes true every second of every day.   Only if we were living in the real universe, by invoking Hitler arguments Voss would be admitting defeat.