Followup on Flywheels and Drilling and Tapping

Reference here, and comments on how to drill and tap the 8-32 holes that are 10 degrees from vertical.  To begin with, the easy part was getting the angle.  I have an adjustable angle plate from my Sherline tools that I could incline at the 10 degree angle and then clamp the flywheel to the table with the Sherline clamps.  This is where having been playing with the Sherlines since 2003 is really helpful.

Actually drilling and tapping at the 10 degree angle turned into a job where none of the tools I have would work.  I wanted to use the big mill as a precision drill press (it's really good at that), but its drill chuck is so wide in diameter that it can't get close enough to the hub to use a center drill to give the bit a good start, and since the the surface is both inclined and round, the drill bit won't start by itself.  Time to use my tools to make tools - a recurring theme.

I ended up trying two approaches that didn't really work, before settling on one that worked fine.  This picture shows the first two.  The very first is the bottom one. 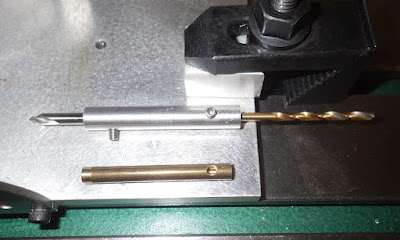 The bottom piece is a quarter inch diameter brass rod, drilled out with the drill bit recommended for 8-32 threads (#29 - conveniently shown in the right end of the top rod), then drilled perpendicular to its axis (near the right end) with that bit and tapped for one of those 8-32 setscrews.  The problem was that there wasn't enough meat in that brass for more than about 2 threads, and they stripped out when I tightened the setscrew.

Onto rev 2, the top one.  The top holder is 3/8" aluminum, drilled with same drill bit.  Now that there's more metal, it grabs the bit securely and doesn't rip out.  This is when I realized I had to use the center drill, and repeated the drill along the bore (3/16") and drill/tap for the setscrew.  Which is when I realized this approach was screwed.  The tool holder holding the drill bit cleared the flywheel, but the center drill is much shorter and the setscrew wouldn't clear it.

Time for rev 3 of the holders.  Go back to quarter inch brass and soft solder (tin-lead electronics solder) the bits into the holder. 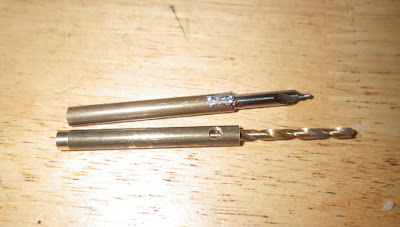 Back when I was in the biz, if someone showed me that soldering job (top) I would have told them, "it looks like a solder-eating bird took a shit on it", but holding a file against it while it was rotating in the spindle cleaned it up and made it look pretty.  To me, the important part was that I could do it with my Metcal soldering iron rather than a torch.  I doubt the Metcal got it hot enough to damage the temper, while a torch might have.

You'll notice the drill bit is not soldered in.  I pressed that in by using my drill chuck in the lathe tailstock as a ram and putting a piece of scrap between the bit and and the lathe chuck.  Then I tried to remove it, even using big pliers on both the brass rod and the drill bit.  No luck.  I test drilled a piece of scrap aluminum with it and the bit didn't move.  Then I sharpened the bit to add whatever advantage I can get.

All of the tool holder work was done on my manual Sherline lathe.  They're all small work pieces, and I don't need horsepower, I need precision.

Now it was time to set up for the drilling, which I did on the big mill using my Rumblepad hand controller to position everything properly before drilling.  I let the brass rod holding the center drill clear the most protruding edge of the flywheel by 0.020".  I found I didn't get a good picture of the angle plate, but grabbed a couple after the main work was done.  I stopped during tapping to grab this shot which kinda shows the overall setup. 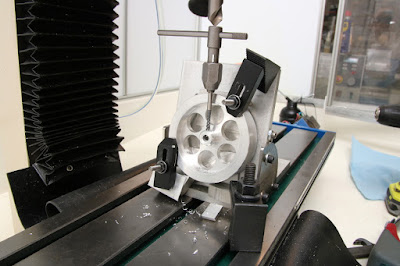 In this picture, the metal bit hanging down at top center is countersink cutter; it's held in the same 1/4" collet that held the tools and is just there to match a divot in the top of the tap wrench.  It helps ensure that the tap stays vertical (although it doesn't look that way in the picture).   As I advance the tap, one half rotation of the wrench at a time, I lower the countersink.

Yet another example of how a task that should be a simple operation turns into something quite a bit more involved.  I should have realized that a quarter inch long set screw would interfere with things and not bothered with the first attempts, but I rushed in rather than spending more time visualizing what was going to happen.  This is straightforward geometry/trigonometry and I could have anticipated all these issues better.

Now it's on to the next part, the bracket that holds this flywheel.  I'm going to redesign that to use ball bearings, rather than use Duclos' approach of letting a steel shaft rotate on aluminum.