Putting RFID Into Guns - an Inside Look

RFID - Radio Frequency IDentification - is a well established technology that uses radio frequency technology to retrieve information from something without being close enough to touch it.  Ordinarily, the part of the RFID system in the object (the tag) is passive; it gets the power to respond to the interrogation transmitter from the radio signal being used to talk to the tag.  Common uses for RFID include electronic toll collection systems used on pay roads, shoplifting control tags in the retail world, and those ID tags implanted subdermally in millions of pets.

One of the trade magazines for the Radio Frequency industry, Microwaves and RF, prints a story from a company in the RFID business called The RF in RFID about their work to develop RFID for tracking guns.  The emphasis of the story is on an AR-15 with a metal lower receiver, because running radio transmitters in metal boxes is usually not successful.


Since each RFID tag incorporates an integrated circuit (IC) with an unalterable unique identification number (UID), it provides tracking by association with the federally regulated serial number of the component. The unalterable functionality is a requirement of currently proposed new legislation (NJ Bill A1016, which also mentions the use of RFID).

By means of RFID, the receiver is well-suited to act as the “custodian” of a firearm’s history by recording within an RFIC tag’s IC any pertinent information of any components that are part of the assembly. Information can be stored within any RFID IC that also contains programmable memory in addition to its UID. The storage of information occurs within the RFID tag, whose IC also has a programmable memory in addition to its UID.

Without a power source in the tag, the tag is only going to have minuscule amounts of power and the range is going to be limited.  These things are not going to be read from tens of feet away, and not through the metal walls of a safe.  These tags are designed to be “vicinity devices” and have a read range of a few feet, perhaps a yard, depending on their size and the size and power output from the interrogator antenna (IA). 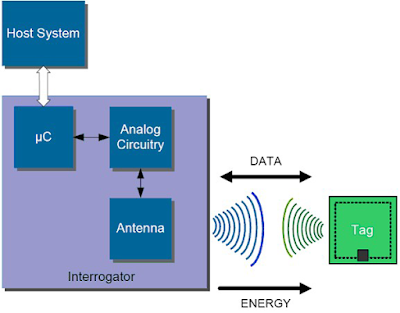 A 4-mm-diameter hole [in the lower receiver] is required to seat the RFID tag. The addition of a 0.8-mm slot provides an improvement in read range, but the RFID tag will also function adequately without it. Further testing is being undertaken to determine if the addition of a 4-mm-diameter hole will degrade the mechanical integrity of the mechanism when subjected to shock, vibration, and variations in temperature.

The tags used with these AR-15 receivers conform to the ISO15693/ISO18000-3 (mode 1) standard for operation in the 13.56-MHz frequency band. The standard specifies passive tags that may only become active if placed in an RF field. 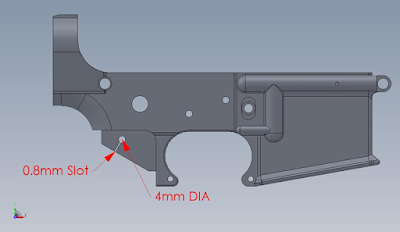 The author's modification to an AR Lower Receiver to accommodate the RFID tag, where the pistol grip is attached.

From this starting point, the company dives into the old New Jersey law demanding smart guns.


In the United States, New Jersey passed the Childproof Handgun Bill into state law on December 23, 2002. This proposed legislation will eventually require that all firearms sold in New Jersey will have some form of mechanism to prevent unauthorized use of a firearm. The law will take effect three years after this type of smart gun is approved by the state.

From this point through the end of the article, the author writes almost exclusively on what appear to be marketing ideas that clearly don't exist.   For example, he talks of adding sensors to the RFID that would react to shock with the intent of keeping track of how many rounds the gun has fired.  Without power, obtained from the interrogator, the RFID chip isn't doing anything, so this immediately adds the requirement for batteries.


As discussed earlier, the receiver is commonly the only federally regulated component of the firearm and will remain with the assembly throughout its life span. Since other components can be replaced, it’s logical for the receiver to store the history of the firearm. Records such as rounds fired, disassembly, cleaning, and inspection criteria are most common data that would be stored in such a location. The bore, firing pin, bolt face, gas ring, and gas key must routinely be inspected and data from reports could be recorded into the tag.

For those law-enforcement officers who are handed an anonymous firearm from storage, it’s prudent to know its most recent history or to update its usage prior to returning the firearm to storage. Performing a 10-second scan of the weapon’s history prior to engagement into an emergency situation could possibly screen out defective or questionable weapons. Cellphone applications with a simple checklist and red-flag indicator are currently being developed that provide a government officer with practical real-time feedback and a reporting mechanism that’s designed to require less than one minute to complete.

Keeping track of the number of rounds fired,  how often the guns is disassembled, cleaned and inspected, without a battery?  Perhaps that's possible in a true armory, perhaps a police department,  otherwise, he's asking for gun owners to want to buy the interrogator.  Archiving inspection reports on the bore, bolt, firing pin and all the rest, also with no power source?  Pure fantasy.

Of course, anyone who knows where the RFID parts are can just as easily pull them out of the gun.  People take their guns apart to do the maintenance he wants to log, and while he proudly talks about the tag being "sealed into the receiver using black epoxy. Such attachment makes it difficult to locate on the firearm, and would require the use of tools to destroy the RFID tag."  I don't think he knows quite who he's dealing with.

I recommend reading the piece to see where the tech industry is on this subject.  They see these things as a challenge to respond to.  Some of the things he talks about aren't that offensive to me and could offer convenience; others are more offensive.  It should be obvious that when the governments talk like they're talking, some people see the gravy train; this is one opinion from one such system architect.