For Radio Amateurs Who Drop By

Of course I talk about ham radio, but not much and not often.  The index at the bottom of the right column shows 53 posts before this one with the label "radio".

Ham radio has been described as "a thousand hobbies with one name" and that's pretty much right on.  There are probably a thousand things to emphasize depending on your interest, from the emergency/SHTF/Tactical radio that is blogged about the most in the places I see, to building your own gear, to uncountable number of technical aspects of the hobby, to experimenting with different modes like Slow Scan TV, fast scan TV, to, well, far too many to mention.

I've always been oriented to the techy side (surprise?), building gear, writing software, semi-automating my station and so on, with an emphasis on testing the limits of the station.  It's pretty common for someone seeing a ham's station for the first time to say, "how far can you talk with that?".  I've always been interested in testing just how far I can, and always pushing those limits.

Probably the thing I find the most interesting in radio is propagation - how the signal gets from one station to the other - and especially the ionospheric propagation.  This can turn into multiple pages itself, but the ionosphere is a layer of the atmosphere where the molecules present in the lower atmosphere are ionized by incoming solar radiation, and the air is so rarefied that it takes long times for ions to bump into something that makes them neutral again.  ("Do you think you're ionized?" "Yes, I'm positive") .  The ionosphere, in turn, is characterized as having several layers, with each layer's name changing with height.  The lowest, densest layer is called the D layer, and as we look farther vertically, they go through the E and F layers.  During periods of high ionization the F layer can further stratify into F1 and higher F2 layers.  The ionosphere expands and contracts, getting taller or shorter with incoming solar energy.

In general, the higher layers are active when the sun is overhead, but even then are dependent on the solar energy output which varies day by day, with the solar cycle, with (possible) grand cycles of solar activities and so on.  Generally, the type of propagation that gets hams excited is from the F2 layer, for a simple reason: it's the highest layer, so signals "reflect" from farther up and can go farther around the world.

There are other types of propagation but tonight I want to talk about one that has been doing phenomenally well lately, called Sporadic E.  Sporadic E has been known for a long time, but "sporadic" in the name is an indication of the toughness of predicting when it will occur.  We know that it's caused by fleeting clouds of sufficient density in the E layer, and that it tends to occur more at certain times of years than others (now in the northern hemisphere).  We know that it tends to form later in the day and linger into the evening; that is, you'd be more likely to find it at 3PM local than 3AM local.  Finally, we tend to observe it on higher frequency bands, especially 28 MHz and up; in the US, 28, and 50 MHz, although it happens on occasion on the 144 MHz band.  Hams have long said that sporadic E clouds form above the tops of thunderstorms - long before mechanisms that could extend the charge into the ionosphere, such as red sprites or dark lightning were discovered.

The last week or so has brought levels of sporadic E propagation that I've never seen before.  There are websites where hams report other stations they've heard or contacted ("worked"); the one I've been using for years is DXMaps.  This is a screen capture from a few minutes ago; around 7:30 PM EDT, 2330 UTC in the UK and earlier in the morning as one goes farther east into Europe. 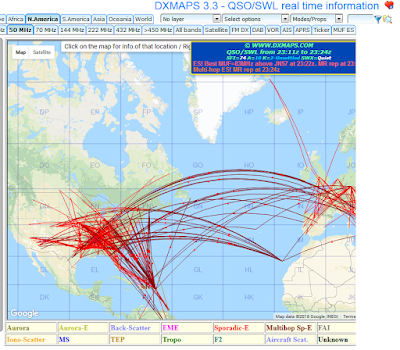 The density of reported paths is so high it's hard to make sense of it, but I call your attention to the long arcs from US into Europe.  In some of those countries it's past midnight, yet they continue to hear and work each other across the continent and across into the US.

I don't have any real numbers on how this compares to other times in the past, but I've heard and worked more Europeans in the last five days than at any time before.

What's going on?  We're supposed to be in a solar minimum that's going to impair propagation and make things worse.  A closer look at the DXMaps website shows a list view of reported contacts.  About 2/3 of them are using a rather new digital mode called FT8.  All of my recent contacts with Europe have been using that.  FT8, part of package of advanced digital modes from Princeton University physicist Joe Taylor, burst on the scene last year, and has become the "new hotness" of ham radio modes.  All of the modes in Joe Taylor's software package are run by connecting the radio's audio input and output to your computer, letting the sound card digitize the audio and pipe the samples to the software for processing.  FT8's strength is that it embeds robust error correction and signal processing to allow copying weak signals easy.  Considering it's an offshoot of another program of Joe's designed to help operate moonbounce, usually very weak signals, that makes sense.  Moonbounce or EME (Earth-Moon-Earth) is reflecting VHF/UHF or microwave signals off the moon to allow any two spots on Earth to communicate (if they can both see the moon).

Clublog, an online service to help hams get confirmations from those stations they've contacted, charts the growth of FT8 vs the most popular modes in log submissions during 2017.  The kicker is that FT8 was barely introduced until about midway through the year.  I had my first few contacts with FT8 last July, when it was still beta software. 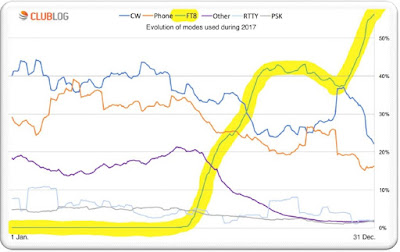 The last digital mode to take ham radio by storm was another "sound card mode", PSK31.  By contrast, PSK31 is a conversational mode (hams call that "rag chewing") with freeform contacts.  Type as much as you want and the other guy will receive - or not.  FT8 is much more structured so more of a contest/fast contact mode.  Each side transmits for 15 seconds alternating with the other station.  When things are working well, a contact can be completed in one minute.  If the messages aren't decoded properly, that can stretch out, but no transmission is longer than that 15 seconds (a small number of characters).

I know some number of hams drop by and read this.  If you're interested in 6m Sporadic E, get that radio on.  If you haven't worked FT8, it's a bit complex to get started with, but if you can run PSK31 you have all the hardware you need.  Sound card to radio.