Your WTAF? Story of the Day

Where "A" stands for actual.

Thanks to a link at WUWT, we find a Daily Mail story that a man who claims to be a time traveler from the year 6491 and who is trapped here in 2018 passed a lie detector test about his story.


A time traveller who believes he is from the year 6491 but got stuck in 2018 when his time machine broke down, has allegedly passed a lie detector test.

James Oliver's story was doubted but paranormal experts say they were blown away when they put it to the test, because the results showed he was telling the truth.

Mr Oliver claims he lives more than centuries in the future but was sent back in time.

Paranormal YouTube site ApexTV carried out an experiment, which had bizarre results.

Why is he trapped here?  Simple!  His time machine is broken.  Unlike the plot of Back the Future in which Marty McFly gets stuck in the past because he needs "1.21 Gigawatts" for the Delorean to take him through time.  Other than that, the plot is kinda similar.  Then why, oh why is this "strange visitor from another planet time" here?  Why to tell us about the global warming and one world government, of course!


According to Mr Oliver global warming is going to get worse and our planet is going to get hotter. He also says there is a United Nations style system of planetary leaders to ensure peace.

The piece is so absurd it's funny.  To their credit, the Mail doesn't give much credibility to the story, and reports the absurdities with a straight face.  You get such gems as:


'Where I'm from, the years are longer.
...
'But we have gifted mathematicians who work to calculate our years from those from other civilisations.'

Oh...Kay... But I think that's simple multiplication, not advanced math.  Maybe in 6491 the ability to use a four function calculator requires "gifted mathematicians".


Although the man has a Birmingham accent, with a US twang, he claims he is from outer space.
...
Describing life lightyears from now, he says more species and planets are discovered – and that there are fights coming between humans and aliens.

The important part, and I'll bet a lot of you have said this already: a "lie detector" does nothing of the sort.  It detects stress and discomfort of the participant.  If he showed no such reaction, it didn't "prove he told the truth", it means either (1) he honestly believes what he's saying and feels no stress, or (2) he has experience with, and possibly training for, taking polygraph tests.  There are places where one can get trained to pass polygraph tests.   Decorum says I should leave it there.

Anybody else notice the year 6491 is 1946 spelled backwards?  Just a coincidence, I'm sure.  Both the ApexTV guy and James Oliver look too young to know anything about 1946. 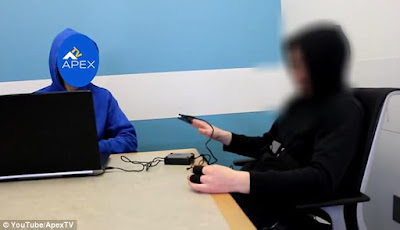 From the Daily Mail, but the photo is clearly labeled copyright YouTube/ApexTV.  The 17 minute video is here.