If You've Worked for a Big Company You'll Understand This

Given the FBI Inspector General's report detailing the horrific ethical issues at the top of the agency in DC, Director Christopher Wray said all the lower level employees will be sent for training.


The FBI will make its employees undergo bias training, Director Christopher A. Wray promised Thursday, after a devastating report found the bureau made bad decisions, has a culture of leaking sensitive information, and may have skewed campaign-season decisions because of bias.

If you've worked for a Fortune 500 company, or probably any company with more than something like 100 employees this is a familiar script.  Business as usual.  One of the executives on Mahogany Row does something wrong, so for the rest of time the rank and file workers get penalized.  Like when company officials from some place were accused of "insider trading" and as a result, every employee in the big companies has to take a mandatory insider training class every year.  In perpetuity.  Or when someone decided that a CEO being optimistic about the company wasn't to encourage the group to but was a dishonest ploy to swindle investors, so Congress passed the Sarbanes Oxley act, and now every employee at a publicly traded company has to take an annual SOX class.

Here, the top layer of officers in the FBI were as biased as a skunk's spray is stenchy, so the rank and file agents will get training in being objective while - from all we can see now - none of the actual offenders will suffer any consequence whatsoever.

Buck Sexton, talk radio guy and expert on the talking head circuit due to being an ex-Three Letter Agency guy, sums it up nicely on Twitter (via Twitchy): 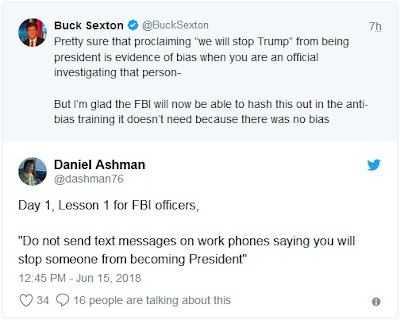 The IG report itself reminds me of the Comey press conference on Hillary from July of '16.  That time out of 15 minutes of air time, he spent 13 of them listing every federal felony and other crime that Hillary committed.  Then he spent the last 90 seconds explaining he was going to do nothing, turned and walked off stage without taking questions or interacting at all.  In this case, the IG points out example after example of all the wrong things the FBI did that were biased and/or illegal, but then said there was no evidence of bias.  Again, these were the headquarters staffers, including the Weasel Comey, Andrew McCabe, Peter Strzok and Lisa Page. 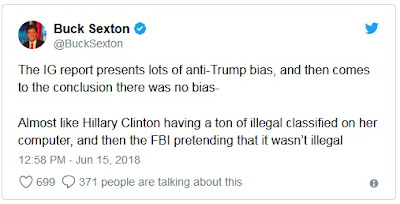 People have been saying for a while that this might well be the biggest political scandal in our country's history.  To have what's supposed to be the premier law enforcement agency in the country apparently trying to take out the lawfully elected president is just so wrong it's hard to wrap my head around it.