About That Other Supreme Court Story

You know, that minor, nothing story about Anthony Kennedy resigning.  It's not like the press has gone unhinged over it.

This is going to be a bit of a ramble, and pull together some disparate ideas.  I don't do these regularly.

One of the first things I heard was anguish that this means they're going to loose their sacred right to abortion.  First off, I'm of the opinion that this would be a good thing, but I think saying this is just trying to provoke outrage among the leftist base - I hear they're already fund raising based on this. Aided by a lack of understanding of how the court works.  The justices don't just sit down and say, "which old rulings do we overturn today?"  They rule on cases brought to them through the multiple levels of the federal court system, and they generally abide by old supreme court decisions; the legal doctrine of stare decisis (let the decision stand).  They wouldn't just throw out an old ruling unless a case was brought to them that addressed the same issues, and of course they do overturn old rulings, as in the union dues case.  This will probably take a year or two. 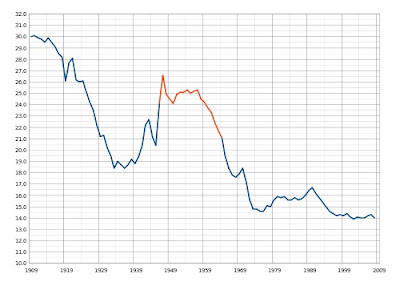 An inconvenient conclusion I could make here is that while I can't make an estimate of how different the demographic picture would be without legal abortion, I'm sure we would be a very different nation.  And I don't mean to focus on just this one aspect: in the time period the birth rate tanked, environmentalists were pushing "zero population growth" and trying to convince people to have smaller families.  There was a broad cultural push from the usual sources to slow population growth that continues to this day.

Viewed from another angle, the main reason we have a bubble of baby boomers heading toward retirement that everyone is alarmed about (or "the Boomer pig in the demographic python is well and truly hitting the cloaca of retirement," as Tam unforgettably said) is that the children who could have been in succeeding generations were either prevented or aborted.  Like Europe, we're attempting to get around that demographic shortfall by immigration.  Like Europe, I think we're going to have lots more trouble coming because of that.