I mentioned my redesign of the flywheel support bracket for the flame eater engine.  I turned a solid, one piece bracket with quarter inch thick pieces into a three piece assembly.  I did this mostly to add ball bearings for the flywheel shaft, but also to avoid a long operation of turning about 2/3 of the metal into chips.  The new design and the old side by side look like this.  The colors were chosen to highlight the three separate pieces.  (The blue block is a duplicate of the middle piece copied over to the right so I could get dimensions). 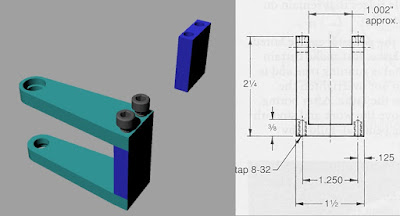 In real life, it came out looking like this, posed holding the flywheel as it's supposed to. If you look closely around the shaft, you can see the ball bearings; 1/4" shaft and 3/8" OD. 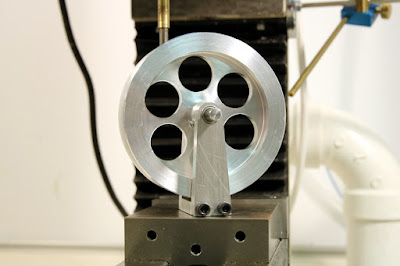 When I was a larval engineer, an old graybeard told me that "engineering is the art of compromise".   There are rarely ever perfect choices that everyone agrees are the best way to do anything and this design is like that.  It does what I wanted.  All the parts worked out just as modeled.  The drawback is that it's three parts and they need to be aligned properly during assembly.  When I first put it together, the flywheel spun, bit also made the characteristic scuffing sound of something rubbing.  The parts aren't perfectly aligned, but I improved that by loosening the four screws on the bottom and putting a shim between the side bracket and the flywheel hub (I used one of my old business cards - still useful after retirement!).  When I retightened the screws and pulled out the shims, the scuffing was gone.  The flywheel still wobbles which argues that the two sides aren't exactly the same height.

These facts together make me think I need an alignment fixture when I build it.

I took a video of the flywheel running, but let me be honest: I built every part in here and I can't stand to watch it at real time speeds for a minute and a half.  So I switched the recording for YouTube to run at 2x real life speed.  The only thing you can see in the video that you can't see in the picture, besides motion, is I spin the setup 180 degrees so you can see both sides of it.

I need to come up with a fixture to hold everything in the right positions for assembly, or else I go back to the author's design.  I have a piece of 1" thick aluminum that I could turn into the original design.