Like a lot of you, I've had a jump starter battery that I keep in the car for emergencies for a while; I got my first one back in '14.  That first one died pretty quickly as a result of being left in the car during the day while at work.  It's replacement was upgraded a bit; that first one was an 11 Amp*Hour (AH) battery, and got replaced by a 15 AH.  The other day, I realized I hadn't run a battery analyzer discharge/charge cycle on that replacement battery for quite a while.

This isn't really the story for tonight, but I tested that battery a few times.  I tested at the 5 hour discharge rate (C/5, or 3A) and at the 10 hour discharge rate (C/10 or 1.5A).  Neither test came close to the rated 15 AH capacity.  The measured data was close to 25% of rated - 3.5 to 3.7 AH.  It stayed that way after four cycles of discharge/recharge but then I dropped it and the plastic case broke in two.  That revealed the battery, a lithium battery, had swollen and I couldn't get the case back on.

So it was time to order an replacement, and I found an unknown brand replacement on sale (the one I had was unknown when I bought it, too).  It was rated 18 AH, so another upgrade; this was 20% bigger than the broken one and 64% bigger than the first one.  It's rated 800 cranking amps, for "up to 7.0L Gas" engines, much larger than either of my cars.  Plus it has the same output marked 12V 10A the previous one had, and that I plan as an emergency, last resort, backup power for ham radio.  I use this port to test the battery, too.

When it came in last Sunday, of course, I topped off the battery on the charger and reran the test.  The capacity came out almost identical to my previous battery.  Here's the data: 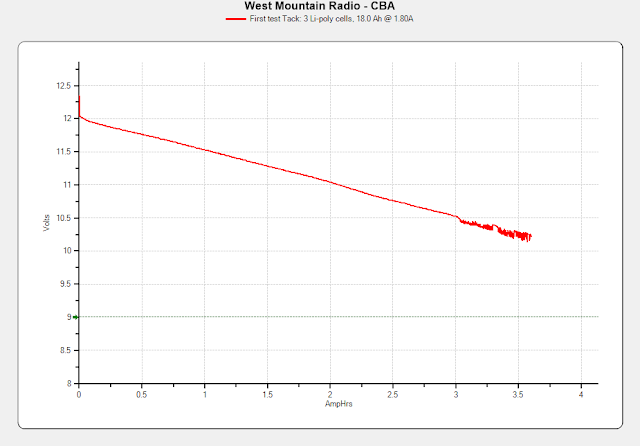 It was clearly time to ask myself if I knew what I was doing.  Time to sit down with the manual (well, brochure).


In the specs, it says it's an 18,000 milliamp hour battery, so I just call that 18 Amp Hour.  For most rechargeable batteries, from Nickle Hydride AAs to AGM lead acid, the test I was doing was proper.  I discharged it at the C/10 rate, 1.8 Amps, and it came up at about 3.6AH to the (approx) 33% charged level.  Looking a little closer in the manual it says 66.6 Watt Hours.  It's not exactly 12V to start and the voltage slowly goes down over the discharge.  If I take the middle voltage (11.125V) and multiply by the 3.6 AH of discharge, that works out to about 40 Watt Hours, rather close to 60 % of the 66.6AH rating.  The numbers are starting to make sense.

If it was really a constant 12V, 66.6 Watt hours would work out to be about 5.6 Amp Hours capacity which is a far, far cry from 18AH.  I see two possibilities: either it's just a sales claim and they're trying to sound good (this used to be legendary with stereo systems back in the day), or the battery is internally different and actually is designed differently for "cold cranking amps" like any other starting battery, not for a steady 10 hour discharge.  I'm leaning toward the second choice; that it's a starting battery designed for enormous loads on rare occasions and then it gets recharged.  I don't know enough about lithium batteries to know how they'd do that, but I barely understand the difference when making a lead-acid battery; in those it's the way the plates are made.

It seems the best way to test it as a starting battery is something that can measure cranking amps.  Since it's not specified for slow discharges, I'm afraid I'm stuck with an "it is what it is."  I'll just run the discharge tests every six months or so and keep track of how it changes vs. time.

I'm posting this for you, of course.  The 66.6 Watt Hour spec doesn't appear anywhere on that Amazon product page that I can find.  It's in the fine print in the paper manual that came with the battery.  That seems to be the most honest rating of the battery.