Between NASA, United Launch Alliance and SpaceX it proved to be a busy day.

This morning at the start of the two hour launch window at 7:50 AM, NASA's Perseverance Mars rover and the Ingenuity autonomous drone helicopter lifted off on a ULA Atlas V from Launch Complex 41 on Cape Canaveral Space Force Base.  Kudos to all concerned for getting a mission that looked to be in trouble around the first of July back on track.  Since the early tests, the work seems to have gone well. 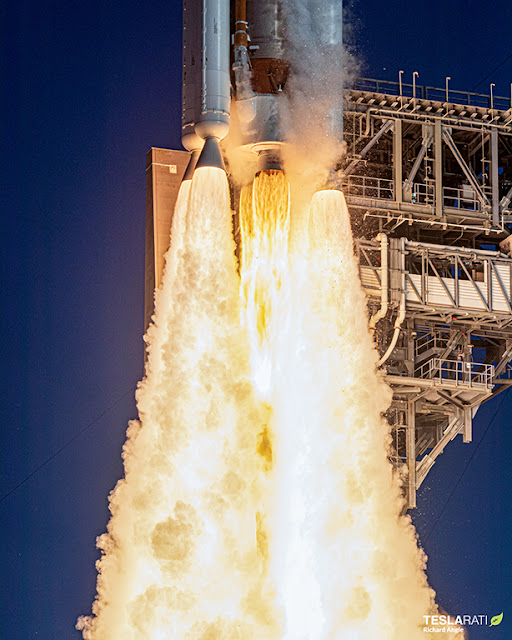 (The two-chamber RD-180 engine and four solid rocket motors of the United Launch Alliance Atlas V 541 rocket propels NASA’s Perseverance Mars mission into space on the morning of Thursday, June 30th from SLC-41 at Cape Canaveral Air Force Station. (Richard Angle))  - I've read to get that rich detail in the rocket exhaust plumes the trick is use an exposure of about 1/8,000 of a second.  Consider that an essentially useless Fun Fact because no one has a chance get these photos except the professionals who deploy remotely controlled cameras closer to the launch than a human can survive.

The trip to Mars will take around 7 months, so the Mars 2020 spacecraft is scheduled to land on Mars on February 18, 2021.   You can see mission status here.


Shortly after the test, the founder and chief engineer of SpaceX, Elon Musk, confirmed that the static fire meant the company now plans to move forward with a short test flight of the vehicle. Based upon a notification from the US Federal Aviation Administration, this 150-meter flight test could take place as soon as Sunday, with a launch window opening at 8am local time (13:00 UTC).

This would be the first flight test of Starship hardware since a stubby prototype—Starhopper—soared to 150 meters in late August 2019. That test, in which a single Raptor engine powered the vehicle upward and laterally for about 100 meters before landing, was successful in demonstrating thrust and vector control of the methane-fueled engine. [Note: Starhopper is generally now called Hoppy on the LabPadre Nerdle Cam - SiG]

Musk tweeted “Starship SN5 just completed full duration static fire. 150m hop soon.”  While we don't know that there are issues found today that need to be resolved before they can let SN5 hop, I wouldn't put a lot of money on the hop taking place Sunday.  Which isn't to say I won't have a browser tab set to that camera.

Ultimately, one of the many prototypes under construction there at Boca Chica, Texas is expected to hop to around 12 miles up or 66,000 feet.  Definitely suborbital, but higher than most commercial aircraft.  It seems likely that will happen before the end of 2020.

But Sunday is still looking to be a pretty raunchy day here.  The latest forecast for Tropical Storm Isaias is to pass to our east, over the Atlantic as a Category 1 hurricane.  Closest approach looks to be early Sunday morning.  On Saturday morning, we'll decide if we're putting up the shutters.

I've found that Saturday's early morning Falcon 9 launch has been postponed until next Thursday at 1:22AM.  I haven't found anything about changes to the conclusion of the Demo 2 mission from the ISS.