New Stimulus Program Appears to be Moving Along

According to Forbes, the congress seems to be converging on Yet Another Stimulus Program and offers a potential timeline.  Writing on Monday, they said:


Senate Majority Leader Mitch McConnell is expected to introduce a new stimulus package this week in response to the Heroes Act, which is the $3 trillion stimulus package that House Democrats passed earlier this year. McConnell’s bill is expected to be around $1.3 trillion, which is less than half the size of the Heroes Act. Republicans and Democrats should start negotiations this week on the proposed stimulus package. White House Chief of Staff Mark Meadows said Sunday on Fox News that McConnell and House Minority Leader Kevin McCarthy (R-CA) will also meet with President Donald Trump and U.S. Treasury Secretary Steven Mnuchin to “fine tune” provisions in the stimulus package.

That lead-in is shocking; the small version of the stimulus they're talking about was $1.3 trillion of made-up money, which would push our national debt up to almost $28 trillion.  The big version would push it up to $29.6 trillion, almost $30 T.  Today, the word is that there has been a lot of argument and debate among McConnell and the Stupid Party members of the senate, but that they're working on it.  No word yet on what it costs.


Republicans balked at various aspects of a potential relief bill including the overall cost, the inclusion of a payroll tax cut, and the exclusion of funding for coronavirus testing. Senators were, however, coalescing around other provisions, including sending a second stimulus check to Americans, although details on the size and scope were still hazy. Senate Majority Leader Mitch McConnell, who is spearheading the legislation, told a news conference on Tuesday, “I’m going to introduce a bill in the next few days that is a starting place, that enjoys fairly significant support among Republican senators - probably not everyone.”
...
High-ranking Senate Republicans voiced their concerns publicly. “I’m not a fan of that,” said John Thune (R-South Dakota), the second-ranking senator, speaking of a payroll tax cut. “If it’s a choice between doing checks and payroll tax cut, I think it’s pretty clear the checks actually have a more direct benefit to the economy.”

I find it appalling that high-ranking, so-called conservative senators are in favor of a second stimulus check but not a payroll tax cut; that indicates that they don't see the fundamental difference between money that's created by declaring it to exist and money that has been earned by producing stuff.  A payroll tax credit is a cut in taxes on wages workers have earned, the other is creating money that doesn't exist.  They don't understand the fundamental difference there.

If all we had to do to have a booming healthy economy was to print money, how come that has never worked once in all of human history?  Let everyone stay home all day, play, and forget this work stuff (wait... aren't we doing that now with the virus, anyway?)  The stores will run out of things to sell, they'll be no food soon enough, no clothes, no toilet paper, and so on.  To quote, of all people, Elon Musk in an interview with Joe Rogan:


“If you don’t make stuff, there’s no stuff.”
...
“This notion,” said Musk, “that you can just sort of send checks out to everybody and things will be fine is not true.”

Isn't that obvious?  If nobody is making thousands of pounds of steel and a hundred other things into cars, there will be no cars to buy.  If nobody is making farm-raised pigs into bacon, there will be no bacon.  I've probably said this about a billion times here, but money is not wealth.  Money is a measure of wealth.  To borrow from the FEE article about the Musk/Rogan interview:


Government checks are only valuable to the extent that there is enough actual “stuff” (goods and services) available for those dollars to buy. The more you lock down production, the more our stock of “stuff” will shrink, and the more our living standards will worsen. No amount of zeros added to those government checks can change that.

When “stuff” dwindles, printing government checks cannot magically reverse that impoverishment. It can only do two things:
Higher consumer spending means burning through our remaining “stuff” faster instead of investing it in production. This means even less “stuff” down the road.

So how bad does it get?  Do they stick the debt at $28 or $30 trillion?  I can tell you what a lot of people seem to be thinking.  At the time I'm writing this, gold is $1872.80/oz.;  back in January (Before Covid - BC) it was under $1600.  Likewise, today silver is $23.02/oz, up from $18 BC.  Not everyone is buying silver and gold and not all the people who do buy it are "whack-job, doomsday preppers;" many are financial managers for major brokerages.  They see lots of fake money coming.  Fake money means prices going up on stuff.  The less stuff there is, because nobody's making stuff, the more expensive that stuff will get. 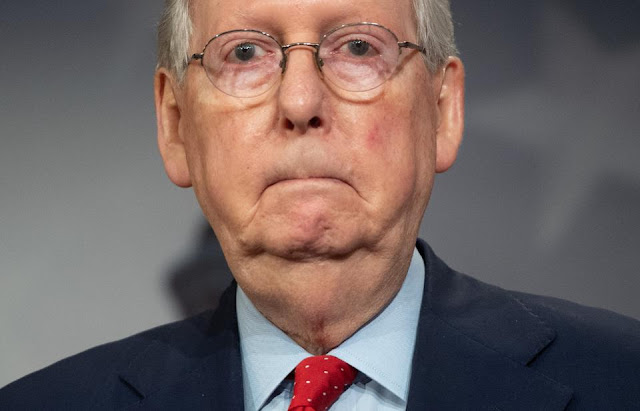 Senate Majority Leader Mitch McConnell.  The turtle on the spot.