Seattle is struggling.  They were struggling before the riots started and now with the resultant costs from Covid and the Chaz/Chop, it has gotten worse.  Being a city council that's run by socialists, and therefore idiots, they've decided to punish upper middle class workers by instituting another city income tax.  Naturally, being idiots, they exempted themselves.


Nonetheless, the Seattle City Council has decided that now is the right time to impose a new tax burden on its residents. On July 6, the council passed the so-called “JumpStart” tax, which specifically targets middle-class jobs.

The council’s new tax will affect employees at medium-to-large companies, but not most small businesses. Applied to businesses with a total payroll of $7 million or greater, it will impose an additional 0.4 percent to 2.4 percent payroll tax on jobs that pay an annual salary of $150,000 or higher. This is on top of already steep federal and state payroll taxes.
...
According to OpenTheBooks.com, 601 city employees in Seattle earned $195,000 or more. Analysts found that “tree trimmers lopped off $160,604; the chief librarian made $197,704; electricians earned $271,070; electrical lineworkers made $307,387; and police officers earned up to $414,543.” The new payroll tax will not apply to any of these government employees or their peers otherwise drowning in taxpayer cash.


According to Payscale.com, the average salary in Seattle is $79,000. It’s the fifth most expensive place to live in America, with the highest rents anywhere in the country outside of California. With this context in mind, workers making $150,000 are far from members of “the 1%.” More realistically, many of the targets of this new tax are middle class by Seattle standards. So while the tax isn’t massive, it does showcase an important trend: In their class warfare charge, left-wing officials aren’t constraining themselves to “soaking the rich,” but are quickly reaching down the income ladder for fresh wallets to tap.

You may have heard about Seattle telling Amazon that they didn't want them in the city anymore.  OK, that's not exactly how they said it.  They attacked Jeff Bezos by name, said, “we're coming for you” and one particularly idiotic councilwoman, Kshama Sawant, said she wants to “dismantle the deeply racist, sexist, violent, utterly bankrupt system of capitalism” and replace it with “a socialist world.” Sawant has also promised to “take into public ownership the top 500 corporations and banks that dominate the US economy.”  Sawant and fellow socialist city Councilwoman Teresa Mosqueda promise this new tax will be a “victory for working people.”

Doubtful.  They claim it will raise $200 Million.  Also doubtful.  The simplest thing for companies affected by the tax to do is to get out of the city limits.  When Seattle instituted a $15 minimum wage that was supposed to wonderful things, too, but reality is simply what it is.  Some restaurants went out of business and closed.  Others went outside the city limits.  Workers' hours went down, or they lost job flexibility and many ended up making less.   Prager University has a new video from a Seattle restaurant server talking about how the $15 minimum wage screwed up her world.

If you were making just under $150,000 in Seattle and were due for a raise, would you want that raise if it went to the city?  Would the company want to give that raise, knowing you'd get a smaller piece of it than they had in mind?  Would you or the company look for ways around that?  It has been known for ages by anyone with the sense to observe cause and effect that revenue streams from soaking the super-rich dry up pretty quick - the world is full of these stories. So the “soakers” eventually must resort to soaking the less rich, and eventually the middle and working classes.

I predict that they may take in some more revenue before the systems adapt, but in the second year, they'll lose money and the city will teeter closer to bankruptcy and collapse.  Seattle is in decline.  It could be terminal if they continue to elect socialists and other idiots. 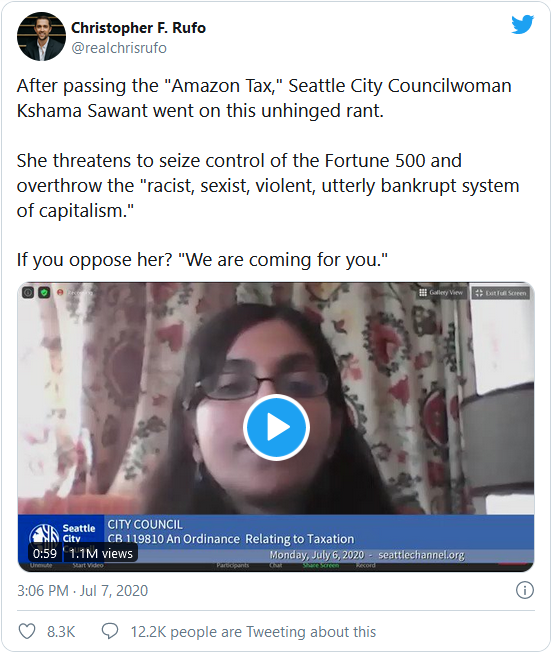 Twitter video is here.  I didn't really feel the need to watch it.

By the way, in the strange world of the Internet, it has happened more than once that people I've written about have stumbled across my blog.  Should that happen to you, Mr. Bezos, I think people in Florida would be happy to have your small but tasteful world headquarters of Amazon move into the state.  Putting it in Central Florida would put you that much closer to your Blue Origin operations on the Kennedy Space Center.  I do have to warn you about the oppressive, Crematoria-style heat and the mosquitoes that raped and killed the invading Murder Hornets, but air conditioning takes care of both of those.