Much to my surprise, it has been since the end of June since I did an update on my Webster engine and all that.

There has been a lot going on for a handful of parts.  My main task has been to make three pieces that become what's called the Valve Block Assembly.  There are three slices, each 5/8 wide by 1" long and 1/4" thick aluminum.  The top and bottom look like each other except the top has drilled and countersunk holes to pass a #2-56 screw, and the bottom has holes tapped for the ends of those screws.  The middle piece has clearance holes in those same places (3/32", .094", from both closest sides).

Today I did a test fit assembly and posed the pieces on the drawing. 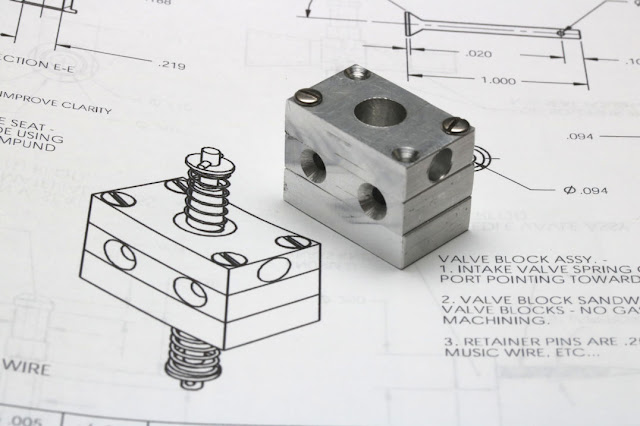 The tall things sticking off the top and bottom in the picture are valve guides or cages.  The valves and cages are the next parts to make, and they're fiddly little things.  The cages are 3/8" OD on that rim at the bottom, and smaller everywhere else; the valves are made from 1/4" diameter steel rod.

The valves require turning a 1/4" oil-hardening drill rod down to .093" diameter for most of an inch.  The backs of the valves are turned at a little over that marked 45 degrees, more like 46.0 degrees, and the valve guide (or cage) will get a matching taper on them.  Then each valve will be lapped onto its cage.  This is where fit gets critical.

Along the way to getting those valve block slices done, a problem that had been developing with my tools got to the point where it had to be fixed.  I have a nice drill chuck that I use on the milling machine.  The chuck is mounted to the milling machine with an adapter from the chuck's JT33 taper to the mill's R8 tooling mounts.  Over the last few months, that chuck started falling off in use.  Since someone always asks, that was while drilling holes not using it to hold cutters for milling.  Originally, it was an occasional thing but over the last several months it got more frequent.  Finally, when I was drilling two holes and countersinking them, it got to the point where it was impossible to cut the countersinks without the chuck dropping off.

My fix was to do one of those things I'd always heard of but never done.  After thoroughly cleaning the adapter and the inside of the chuck with mineral spirits, I put the chuck in a toaster oven at 200 F and put the JT33 to R8 adapter in our freezer at 0F.  I left them there for an hour and then dropped the adapter into the chuck.  Once there, I hammered the adapter with a brass chunk between hammer and adapter (softer metal so that the R8 adapter didn't get reshaped).  The idea is that the adapter has shrunk in diameter from the cold while the chuck has gotten bigger, making the adapter fit farther into the taper than if they were both at room temperature.  When they both return to room temperature, it should make a very tight fit.  Since then, I've done a few dozen operations and the chuck has remained in place.

Also along the way to getting the valve block slices done, I lost a critical drill bit.  When I got the mill, I bought one of those "900 drill bits for $1.50" sets - probably this one from Grizzly - fully expecting them to be able to drill one or two holes before they went dull, but thinking it would show me what I needed to buy.  Over the years, that set has gotten a lot of gaps in it from bits that have broken and it was getting hard to get the right size.  A lot of times, even with a numbered bit, you can get by with the one next to it in the set, but there are times when you can't.  I've had some bits not able to drill two holes before they broke, and some have lasted for many holes. In this instance, the bit stuck in the work.  Probably melted some aluminum chips and then they refroze.  I was able to get the bit free but it wasn't likely to make another hole.  Bottom line was I needed to buy a good set of the numbered bits - #1 to #60.

Bottom line is that there has been a lot going on but not much in results.  I think I start cutting the valves tomorrow.