Not For You, For Those People You Know That Need It

It's pretty safe to say we all know some useful idiots.  People who are so indoctrinated to the anti-American, anti-Constitutional viewpoint that they're swallowing everything about the riots, burning and protesting.  Of course, the term is commonly credited to Vladimir Lenin but is used widely now.  In communist conversation it denotes the people who aren't really dedicated to the revolution but can be counted on to voice support for all their talking points and chant all their protest chants.  The idiots will be lined up against the wall when the executions start.  The communists don't want revolutionaries, they want obedient slaves.

Perhaps you've tried to point out their logical inconsistencies to them; perhaps you've disputed some of their points, but you haven't made any progress pulling their heads out of their asses; the vacuum is just too strong.  A staff writer for Glenn Beck's media company put together these “21 ways to know if you're a 'USEFUL IDIOT'”  You don't have to subscribe to anything to read it - unless my computer remembers things I don't.  I'll copy it here.

Written in, and intended to be read in, Jeff Foxworthy's You Just Might Be A Redneck manner. 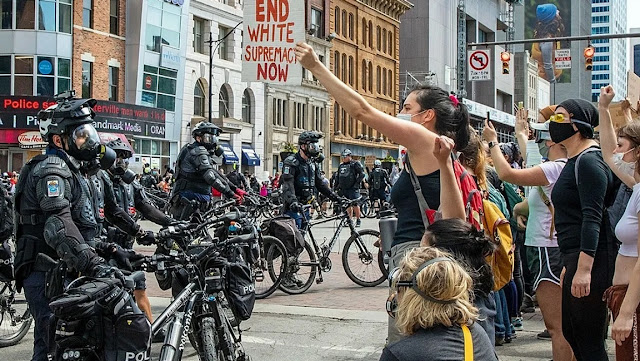 A crop of useful idiots on the right, photo from the source website.

Does anybody recognize the city?  The only things I can read that offer a clue are the Tim Horton's shop behind the bike cops on the very left of the frame and, on the top tube of that bike on the left closest to the camera, I think it says Columbus Police.  The Webz tells me there's a few Tim Horton's shops in Columbus, Ohio.  That seems possible but isn't a slam dunk.