June Won't Be a Four Launch Month for SpaceX

A few weeks ago, I reported that SpaceX watchers were commenting that there were four launches scheduled for the month of June, which would give the company their first four launch calendar month ever.  That milestone slipped away two days ago, when the 10th Starlink launch was postponed - after having slipped from Tuesday, to Thursday and finally Friday.

The new launch date has not been announced, nor has any detailed reason for the delays been offered.  On Friday, their statement simply said, “SpaceX is standing down from today's launch in order to allow additional time for pre-launch checkouts in advance of its tenth Starlink mission.  Falcon 9 and its payloads, 57 Starlink satellites and 2 satellites from BlackSky, a Spaceflight customer, remain healthy.  SpaceX teams are evaluating the next earliest launch opportunity and will announce a new target date once confirmed.”

Teslarati SpaceX correspondent Eric Ralph had this truism to relay.


Additionally, SpaceX’s willingness to delay an internal Starlink launch by a substantial amount serves as a confirmation that the company continues to prioritize reliability and established procedures over expedience. Given that any Falcon 9 failure would severely impact all SpaceX launches, including internal Starlink missions and commercial launches for customers, that should come as no surprise. Still, SpaceX’s Starlink missions pose a perfect storm of low cost and high launch frequency requirements that could incentivize corner-cutting in the short term.

At the same time, it’s not actually clear whether Starlink V1 L9’s delay was SpaceX’s decision or something decided (or heavily influenced) by the US military. Shortly after SpaceX announced the delay, new regulatory filings suggested that June 28th was the new target, but they were quickly rescinded. It’s possible that the US military asserted its desire to be SpaceX’s immediate priority ahead of the launch of an extremely expensive GPS III satellite.

Another point of interest for the military is that this is the second launch of a GPS III satellite and will be the first one in which the military will allow SpaceX to recover the booster.  The first GPS payload flight was in December 2018 when SpaceX was new to successfully recovering boosters.  I suppose the military was too concerned it might inhibit the booster performance to allow enough fuel to do the landing burns.  The never-flown booster for this mission, B1060, should land on recovery drone ship Just Read The Instructions (JRTI) by about 4:05 PM EDT if all goes well. 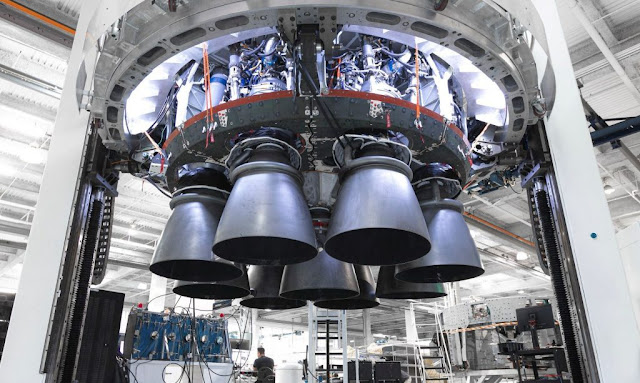 The business end of B1060 during tests earlier in the month.  It is currently vertical, stacked and on the pad at Launch Complex 40.

I should point out that with last Friday's Starlink launch moving into July, there are now four launches scheduled in that calendar month making July their possible first four-launch month.


Starlink-9 (early July), ANASIS-II (mid-July), SAOCOM 1B (late July), and Starlink-10 (late July). Once again, with two launches scheduled near the end of the month, the odds that one or more missions will slip into August are substantially higher, but the possibility remains.

The once a week launch cadence seems to be tough to keep up.  To my knowledge, there's no one on Earth that can advise on how do that.  Most of the other big contractors have a once or twice a year cadence.