Another Day, Another Falcon 9 Launch. Almost

It seems that way but it's not a daily occurrence.  Not yet.  Sunday, we were in the after-buzz of the successful return of manned space flight to the US, with a mission that though still underway seems nearly flawless, when we read that the long delayed Starlink 8 mission to put up the eighth batch of 60 Starlink satellites has been set for Wednesday night, June 3rd, No Earlier Than 9:25 PM EDT.


The mission – deemed Starlink-8 – will be SpaceX’s eighth Starlink launch overall and the seventh launch of upgraded v1.0 satellites, pushing the company a mission past the halfway point towards its first internet beta test. If successful, it will raise SpaceX’s ever-growing constellation to some ~475 satellites strong, approximately 400 spacecraft shy of the ~840 COO and President Gwynne Shotwell believes are necessary to begin rolling out Starlink internet service.

The Demo 2 mission launched from Pad 39A; Starlink 8 will launch from Launch Complex 40, about 3-1/2 miles down the Cape from 39A, so they don't have to turn around 39A and get it ready for this launch.  I find no indications that the Falcon 9 and payload has or has not been standing on LC40 since we started talking about this mission in mid-May.

This morning's forecast calls for an 80% chance of good weather for the launch.

Despite the fact that this doesn't require a fast turnaround of 39A, it still pushes on SpaceX's capabilities.  Drone ship OCISLY (Of Course I Still Love You) is carrying the booster from the Demo 2 mission back to Port Canaveral, with an expected arrival time of Tuesday afternoon to evening.  There isn't enough time to get back out to the recovery zone even without any time spent working on the booster, so this mission will feature the Return to Service of their second drone recovery ship, JRTI (Just Read The Instructions).  On Saturday, the day of the Demo 2 astronaut launch, drone ship Just Read The Instructions (JRTI) was seen heading out into the Atlantic Ocean, deck cleared for the first time in the better part of a year. 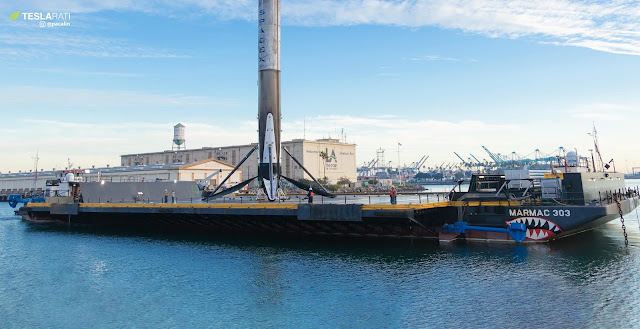 JRTI at the Port of Los Angeles with booster B1049 aboard.  Pauline Acalin photo.


SpaceX intends to perform its limited manifest of future Californian launches while relying entirely on return-to-launch-site (RTLS) rocket booster recoveries back onshore, freeing up drone ship JRTI to head to Florida to support the company’s far busier East Coast manifest. After transiting the Panama Canal in August 2019 and undergoing several months of refits in Louisiana, JRTI arrived in Florida in December 2019 and has been gradually upgraded at Port Canaveral over the last few months. Now, outfitted with a new Octagrabber robot and thrusters and power supplies that dwarf those on SpaceX’s other drone ship, SpaceX has apparently given JRTI the go-ahead to attempt its first booster recovery in almost a year and a half.

The Octagrabber is a new addition to the fleet, but I don't know if this is a first use or not.  This is a low profile robot that maneuvers under the booster and grabs it to keep it from sliding around on deck.

The unmentioned highlight here is that photo shows JRTI with B1049 aboard, the same booster it will attempt to recover on Wednesday night.  Plus, B1049 is going for its fifth flight and recovery.  You might remember that the last booster going for its fifth flight had an engine malfunction due to some alcohol left in the system by a test error.  That was B1048 two and a half months ago.


If B1049 can successfully launch and land for the fifth time on June 3rd, it will become the pack leader of SpaceX’s fleet of reusable rockets. With a safe landing, B1049 can prepare to become the first booster to launch six times, hopefully proving that Falcon 9 can safely fly six, seven, eight, or more times – perhaps one day cresting 10 launches to achieve Falcon 9 Block 5’s design goal.