The Biggest Risk for the Next Starlink Launch is Weather

June first is the start of the Atlantic hurricane season, and it's rather common for some development to be getting started just about any day now.  This year is like that, with the NHC assigning a greater than 60% chance of development of a subtropical system to develop off the NE Florida coast in the next five days. 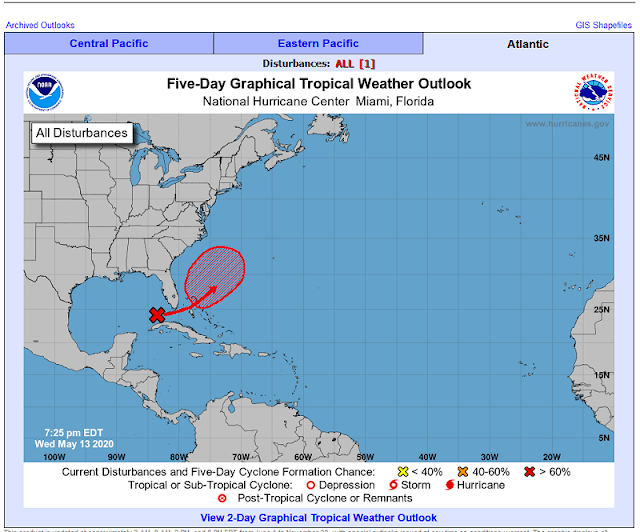 There are other interesting aspects to this launch, such as booster B1049 going for the elusive 5th landing that SpaceX has so far been unsuccessful at pulling off.  They say the boosters should be reusable 10 times, but have yet to recover any booster more than four times.

It’s unusually important that this 7th Starlink launch goes perfectly, as any in-flight anomaly would almost certainly delay Crew Dragon’s crucial NASA mission. Additionally, if Starlink-7 slips more than a day or two, it could easily force SpaceX to push the mission into late May or early June, as Crew Dragon’s first crewed launch will also need a drone ship to recover its brand new Falcon 9 booster.

SpaceX moved their Pacific recovery drone Just Read The Instructions (JRTI) to the Atlantic in support of the increased launch cadence over here.  They've been doing some serious upgrades to JRTI, but don't think it's likely to be ready for these next two launches.  Which leaves them with one drone, Of Course I Still Love You (OCISLY).


Typically, OCISLY has taken around 7-10 days from port departure to arrival to recover Falcon 9 boosters after Starlink missions, most of which is spent being slowly towed by tugboats. In simple terms, assuming no technical or weather-related launch delays, that would give SpaceX just a handful of days to remove booster B1049 and turn OCISLY around to recover Crew Dragon Demo-2 Falcon 9 booster B1058. Unfortunately, to recover Starlink-7 Falcon 9 booster B1049, OCISLY is heading more or less straight for a tropical depression forming in the Atlantic Ocean. High seas in the recovery area are an almost guaranteed launch delay unless SpaceX is willing to expend B1049 (very unlikely).

Part of the whole mission to launch Starlink satellites is to test these "experienced" (not old!) boosters on their own nickel and not on flights that customers have paid for.  I tend to think they really wouldn't want to lose either B1049 or the brand new B1058.

Anything I'd put here for what I think is going to happen is just a WAG.  My guess is that they'll watch this weather system for a few days and decide as late as practical if they're going to go for it or delay the Starlink 7 mission until after the critically important Demo2 flight for NASA on the 27th.  OCISLY would have to be almost all the way to its assigned location out in the Atlantic by that time.  I have even less idea if they'd order OCISLY back in to Port Canaveral or not.  Although the article didn't mention it, at least one booster was lost after a successful landing because the seas were too rough and the booster slid around on the deck before it could be secured.  Nobody wants to see that happen.