The Milestones To Wednesday's Manned Launch Keeping Going By

Today was a big day in the preparations for Wednesday's return to manned space flight.  First, today's Flight Readiness Review took place behind closed doors and was declared a success with no issues raised.  Second, the flight-ready Falcon 9 and Crew Dragon capsule underwent a booster static fire test for a few seconds on historic pad 39A.   (That's a surprisingly low quality 5:38 long video that I set to start at 2:45 and the static fire is about 3:10)  The launch vehicle was rolled to the pad yesterday.


On Thursday and Friday, senior managers from NASA, SpaceX, and the space agency's international partners held long meetings to review all of the aspects of an upcoming flight of the Falcon 9 rocket and Crew Dragon spacecraft.

These discussions must have gone well, because on Friday afternoon, NASA officials emerged with a clear message: "There are no significant issues," said NASA Associate Administrator Steve Jurczyk, who led the meetings behind closed doors at Kennedy Space Center. "In the end, it was a very clean review. We are ready to launch."

That article, on Ars Technica, reminds us that it was just over a year ago (Saturday April 20) that the test Crew Dragon capsule was destroyed on the pad when the Super Draco thrusters exploded milliseconds before they were supposed to fire.


Since that time, SpaceX has addressed not only the root cause of that problem but has also overseen a complete redesign of the vehicle's parachute system. The company closed out dozens of other significant issues to reach this point.

NASA's manager of the Commercial Crew Program, Kathy Lueders, acknowledged that the process has been a whirlwind. "Last April, I probably wasn't thinking I was going to be flying in a year, but you know what—you can never sell this NASA and SpaceX team short," she said. "They've always accomplished miracles for me. And I'm very, very proud of them."

It's a busy time until launch and there will be several more milestones to be met before then.


Saturday the crew will conduct a "dry" dress rehearsal in which Hurley and Behnken suit up for launch day, and there will be a Launch Readiness Review meeting on Monday. But the biggest concern is probably weather; there are multiple constraints for the Falcon 9 launch and emergency abort scenarios down range. Florida may see some scattered to widespread showers next week, according to medium-range weather models.

Yet NASA and SpaceX are very close. (NASA Associate Administrator) Jurczyk said Friday it "is hard to believe" we are just five days from launching this crewed mission, and we have to agree. We can't wait. 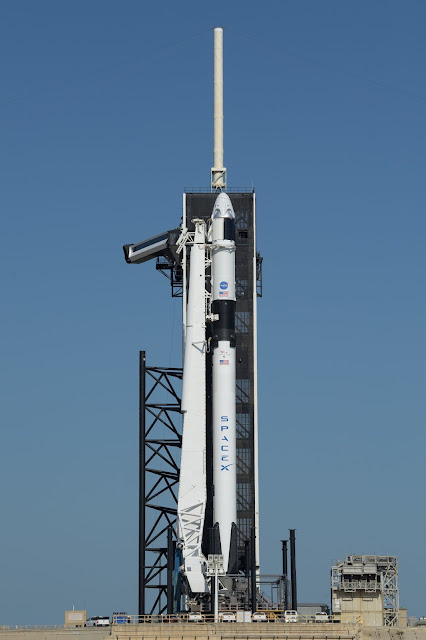