I think everyone who reads here regularly knows that I've written on the topic of RF safety; probably the most in-depth look was a Radio Sunday post last summer.  You'll probably have noticed that I consider RF (Radio Frequency) energy as visible light only lower in energy, because, well, it is!  Sunlight or electrical light, if it's too bright or too powerful, can damage delicate tissues.  Nobody disputes that RF can cause injury from heating, everyone knows we have physical therapy diathermy machines and microwave ovens (systems which depend on exactly the same phenomenon - dielectric heating); it's the "other stuff" that gets blamed on RF, everything from cataracts to hemorrhoids.

If you're an amateur radio operator, you're required to attest to the safety of your station on your license renewals, and it's typically not even something that needs to be analyzed.  If you run the typical 100 Watt transmitter and like to hang out on 40 or 80 meters, you don't even need to do the simplest analysis.

The FCC publishes an excellent (and very readable) document with a dense title: “Evaluating Compliance with FCC Guidelines for Human Exposure to Radiofrequency Electromagnetic Fields” (pdf warning) and subtitled “Supplement B (Edition 97-01) to OET Bulletin 65 (Edition 97-01).”    Some title, isn't it?  To paraphrase Mark Steyn, it's not written like a refrigerator manual for people who really love refrigerator manuals.  It's well written - but it is kind of dense.

I thought it would be helpful to reproduce some information out of this.  The first is the power limits for a ham station that don't require any analysis at all.  This is Table 1 in the document. 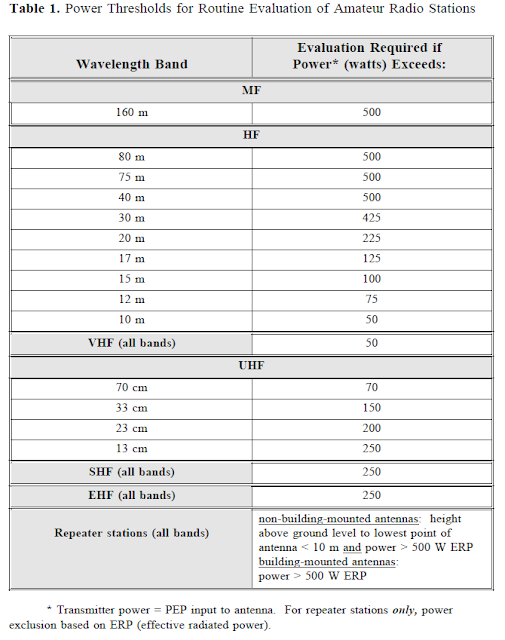 Reading directly across, say you're running that 100W transceiver on 20m.  Regardless of your antenna, you can't generate enough RF fields in a nearby observer to be even potentially hazardous.  You need to look closer if you're running 225 W PEP into the antenna, which is going to be less than your radio's output because of loss in the cable or switches or anything else the signal goes through.  Notice though that if you run that same radio on 10 meters you need to do some analysis because the limit there is 50 Watts.

Reading farther, though, you see if you're running more than 50 W on any VHF band (6m, 2m and 220MHz in the US), you need to look a little farther.  As the frequency goes up through UHF into the microwaves and higher, those powers go up.

So what if you want to run full amateur power on HF through 6m, 1500 W PEP?  Then you need to look at these tables. 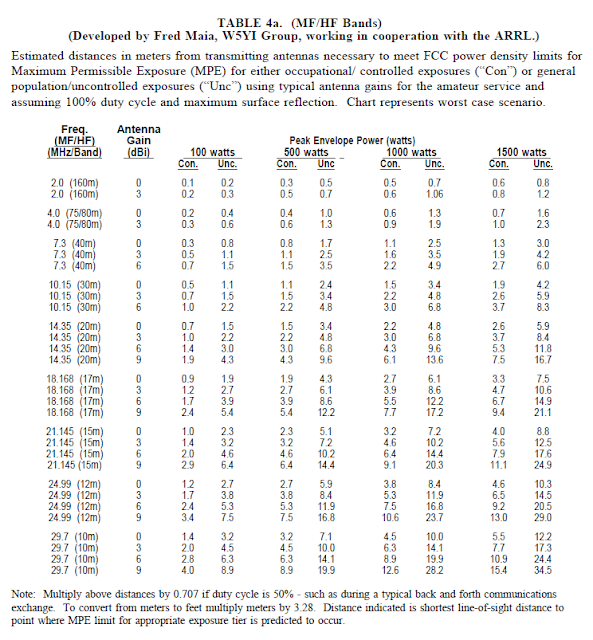 This takes you through HF and the next one takes you as high as the FCC document goes. 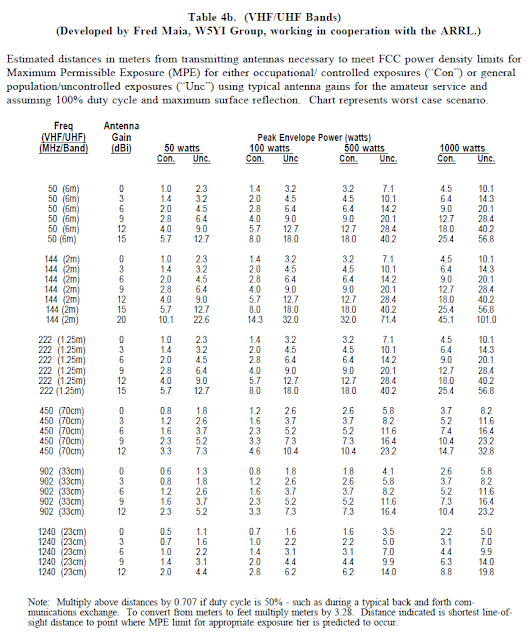 The tables all use the same basic approach, so let me grab the top of Table 4b - the 6m (50-54 MHz) section.  There are six entries for six different antenna gains.  There's a couple of ways of expressing antenna gain but these all use dBi; that's the ratio of the power in the forward direction with respect to a theoretical radiator that is equal power in all directions (an isotropic radiator - where the "i" comes from).   It takes a pretty phenomenal antenna to get to the last one at 15 dBi. I'll grab the 9 dBi antenna because it's a good antenna and it's an example.

What the numbers across tell you is the safe distance from the antenna for Controlled access (someone who knows it could be dangerous, like you) and Uncontrolled access.  That would be your neighbors, kids in the street and so on.  If you're running 100W, the closest those uncontrolled people should get is 9 meters (about 30') from the front of the antenna.  If you're running 1500 W, those kids shouldn't be within 28.4m or 93 feet.

It's important to note that those numbers are for 100% duty cycle: full power, all the time.  Some digital modes put out full power for transmissions that might be 30 seconds out of a minute while conversational exchanges will be less.  It is fair to de-rate those numbers and say that during your contacts you listen about half the time and transmit about half, and that means lower average power.

Let's say you're pointing your antenna in the direction of some neighbor (unavoidable in the suburbs and many places).  If their house is more than 93 feet from your antenna, they won't be exposed to a level of RF that could be dangerous.