Some Virus Stories That Have Grabbed My Attention

Over the past month, as the nation struggles with trying to resume some degree of normalcy and apparently is fighting off tyrannical state authorities without actually, so to speak, fighting those state authorities, a handful of stories have caught my eye and got stuck in a folder full of stories.  I thought I'd post about that here, but I could put dozens of pictures in this post and take dozens of screens to tell the story.  After some consideration, I thought I'd offer a link and a brief explanation.

Bear in mind, I'm an advocate of the idea that the important things in any learning situation are the things that aren't expected.   It's often stated as “the most important phrase in a scientific investigation is rarely, 'Eureka! I've found it!!'; it's usually 'that's funny'.”  As one professor told me years ago, if you're not surprised, you're not learning anything new.

To begin with, there have been several papers that say lockdowns are ineffective.  The first I noted was in an Israeli publication called Mako and linked to by Townhall.


Professor Yitzhak Ben Israel of Tel Aviv University, who also serves on the research and development advisory board for Teva Pharmaceutical Industries, plotted the rates of new coronavirus infections of the U.S., U.K., Sweden, Italy, Israel, Switzerland, France, Germany, and Spain. The numbers told a shocking story: irrespective of whether the country quarantined like Israel, or went about business as usual like Sweden, coronavirus peaked and subsided in the exact same way. In the exact, same, way. His graphs show that all countries experienced seemingly identical coronavirus infection patterns, with the number of infected peaking in the sixth week and rapidly subsiding by the eighth week.

The Wuhan Virus follows its own pattern, he told Mako, an Israeli news agency. It is a fixed pattern that is not dependent on freedom or quarantine. “There is a decline in the number of infections even [in countries] without closures, and it is similar to the countries with closures,” he wrote in his paper.

Another one of those sayings is along the lines of "one paper doesn't mean much; several might".  An Oxford Professor says the UK's Covid epidemic peaked in March and the lockdowns now are doing more harm than good.

We can't talk about this story without Sweden coming up.  Sweden, of course, had a very laissez-faire response to the pandemic, and yet their results are "middle of the pack" among the European Union and neighboring countries.  As in other examples, most of Sweden's infections and deaths were in the highest population density portions of the country - around Stockholm.


Critics point out that Sweden’s per capita COVID-19 death rate is higher than several of its Scandanivan neighbors—Finland, Denmark, and Norway. Proponents point out that Sweden’s death rate is lower than many of its European neighbors—Belgium, France, the United Kingdom, Spain, and Italy—who initiated strict lockdowns. Proponents also point out that Sweden has “flattened the curve,” noting that the nation of 10 million has not seen its hospitals overrun or experienced medical equipment shortages.
...
“Whether or not they have openly embraced the Swedish approach, many other countries are now trying to emulate aspects of it. Both Denmark and Finland have reopened schools for young children,” wrote Professors Nils Karlson, Charlotta Stern, and Daniel B. Klein. “Germany is allowing small shops to reopen. Italy will soon reopen parks, and France has a plan to allow some nonessential businesses to reopen, including farmers’ markets and small museums, as well as schools and daycare centers.”

A standalone article on The Spectator about how Sweden lowered its 'R naught' number without lockdowns.

A professor of Political Science isn't the kind of guy you expect to have insights about viruses, but professor Wilfred Reilly does numbers and that's what it's about.  He writes "There is No Empirical Evidence for These Lockdowns" on Spiked.  This is quite possibly the money quote:


The question the model set out to ask was whether lockdown states experience fewer Covid-19 cases and deaths than social-distancing states, adjusted for all of the above variables. The answer? No. The impact of state-response strategy on both my cases and deaths measures was utterly insignificant. The ‘p-value’ for the variable representing strategy was 0.94 when it was regressed against the deaths metric, which means there is a 94 per cent chance that any relationship between the different measures and Covid-19 deaths was the result of pure random chance.  [Bold added - SiG]

If you love data visualizations, you might like this place.  Big shocker, I know: the best predictor in this multivariate analysis for fatalities is population density.

An interesting study by Stanford Medical School doctor Jay Bhattacharya was to test antibodies to the virus among Major League Baseball team staff members. This focused on staff; not the players, the other thousand people in the various offices.


The results of the MLB study showed that only 0.7% of the staff had the antibodies indicative of having had COVID-19.

Some staff is located in areas where antibody testing has been conducted for the general population such as New York, Los Angeles, and Santa Clara. Most of these locations showed the MLB staff had a much lower rate of prior infection than the general population. For example, the New York City metro area showed 25% of the population had antibodies. The MLB staff for the Yankees only showed antibodies in 1.64% of the employees. The Mets tested positive at a rate of 2.61%.

The implication to Dr. Bhattacharya is that lockdowns might even be counterproductive.


“I think in the back of people’s heads there is this idea that somehow we can eradicate this disease if we just stay locked down. That is not possible. The serologic evidence, even the MLB study, suggest this. It suggests the epidemic is too widespread to eradicate. It spreads via asymptomatic contact. Like people who don’t have very many symptoms, even mild cold symptoms can spread the thing. They aren’t going to show up for testing. They aren’t going to show up at a hospital or a doctor.”
...
“There is no safe option. If you think that having a lockdown will provide you safety, you are mistaken. Because the problem is this lockdown has had enormous negative effects on the health of people in the United States and around the world.”

"Enormous negative effects on the health of people...?"  Since the lockdowns started, I've been saying we're only measuring one thing - the fatalities - and we're not measuring that accurately.  No one is tracking the actual costs and deaths from the lockdowns.  The National Institutes of Health ran this paper simulating the effects of the lockdown on diabetic patients, for example.  They conclude the longer the lockdowns, the worse the number of patients with diabetic complications.

Early on in the spread of the disease, it was pretty easy to come to the conclusion that eventually everyone on earth will be exposed to this.  It's a new virus, and new viruses jump from animals to humans pretty regularly; it's simply how the world works.  I don't have strong numbers to base this on, but I believe the nationwide downward trend in new infections will continue downward, this numbers guy says the worst of the epidemic is over, but the virus will be back next fall.  It's my understanding that coronaviruses, as a group, are hard to create vaccines for.  The common cold is one of many such viruses that we're always exposed to, for example, and there's no good vaccine for the common cold, right?

I'm not saying this is a cold; I'm saying it's in the same family of viruses.  OK, Google?

So what do you do?  Covid-19, if it's unique at anything, seems to be very good at attacking the metabolically unhealthy.  The reason the death rates are the worst for those over 80 is that the majority of people in that group are metabolically unhealthy.  It's worse than that.  In the American population at large, less than 20% are ranked as metabolically healthy on five indicators that are assessed.  If you have high blood pressure, diabetes, a bad HDL:triglycerides ratio, existing heart disease or lung diseases, it might a good idea to isolate yourself.

The surprising thing to me was how good blood levels of Vitamin D were as an indicator of surviving Covid-19.  Those patients with a measured blood level in the deficient range (under 20ng/mL) had a 10x worse chance of surviving the virus than those with normal levels of the vitamin (>30ng/mL), correcting for age, sex and other comorbidity factors (right plot here).  When you add that to the widely reported intolerance of the virus for heat and humidity, that might be a factor in the better numbers of Florida, Georgia and southern states as opposed to the Northeast.  Get outside in the sun, a few minutes a day to start if you've been locked indoors too long. 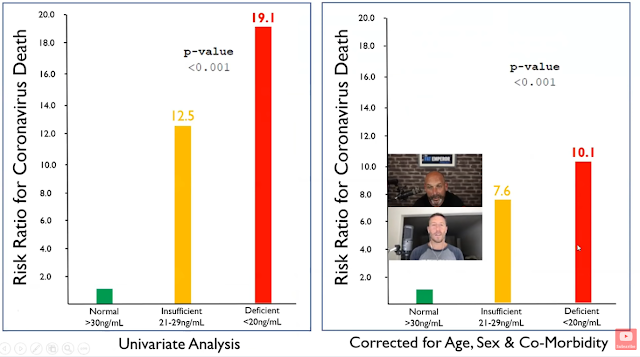 A screen capture from an hour and a half podcast with those two guys whose images are stuck in the right graph; an American M.D. and an Irish biochemical engineer.  Interesting, but probably too geeky for most people.