The Only Hurdle Left to Demo2 is the Weather

After the years of effort and billions of dollars spread among the handful of contractors, NASA and SpaceX are at the mercy of the weather for tomorrow's 4:33 PM EDT Demo2 mission to the ISS.  To be honest, it's the best possible position to be in.  All the pre-launch reviews and dress rehearsals have been passed, the approvals have been granted and we're in the final 24 hours to launch.  The chances have improved over the last 24 hours so that the current forecast from the weather squadron at Patrick Air Force Base (pdf) is for a 40% chance of weather violating launch criteria.

There is no mention of a launch window for this mission, just the launch time.  If anything comes up to delay the countdown, the launch will be scrubbed.  The next calculated launch time will be Saturday, May 30, at 3:22 p.m. with Sunday at 3 p.m. as a backup to that.


"Everything is looking good. As of right now, we are 'go' for launch," NASA Administrator Jim Bridenstine told reporters Tuesday morning. "Our country has been through a lot. This is a unique moment where all of America can take a moment and look at our country do something stunning again."

Expected at KSC for the launch: President Trump, Vice President Pence, SpaceX CEO Elon Musk, at least half a dozen current and former astronauts, and countless other VIPs. They will be joined by a much smaller press corps and other visitors than had been expected before the outbreak of the coronavirus pandemic.
...
If all goes according to plan, Behnken and Hurley will make a 19-hour trek to the ISS and attempt a docking at 11:39 a.m. Thursday. A little over two hours later, onboard crew Chris Cassidy, Anatoly Ivanishin, and Ivan Vagner will help open the hatch, ending the first phase of the demo flight.

Something that might not be well known is that SpaceX engineered the suits for this mission as well as the capsule and rocket system.  They'll suit up in the Operations and Checkout (O&C) building; as has been tradition.  The departure from tradition is that instead of the Airstream RV to the launch pad, Bob and Doug will be driven in Tesla Model Xs. 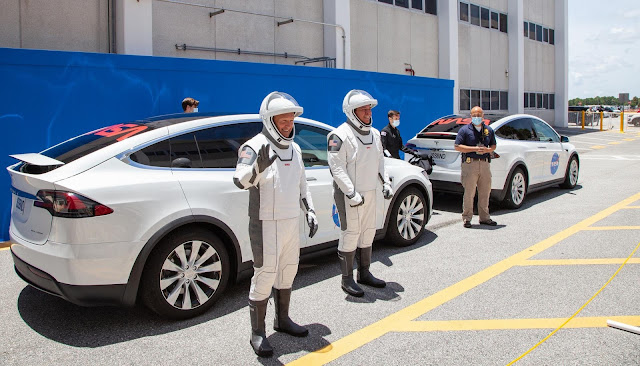 Doug Hurley (l) and Bob Behnken with the twin Model X Teslas that will ferry them the couple of miles to pad 39A.

While prepping this post, one of the voices in my head said, “hey, you've got pictures of the last shuttle mission; the last manned launch from the KSC.” 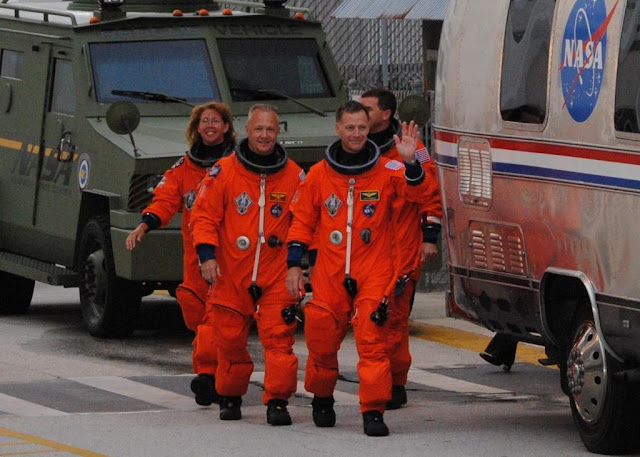