Yesterday, SpaceX successfully had a static fire test of SN4 at Boca Chica, Texas.  This was at the end of several days of delays and lots of construction being added to the Starship.  Before the end of this video, fire is seen at the bottom of the booster that goes on for quite some time.  Water systems on the test stand spray the fire and eventually put it out, but the results weren't quite clear as of earlier today.

Now more than 12 hours after Starship SN4 fired up its new Raptor engine, the ~30m (~100 ft) tall, 9m (~30 ft) wide prototype is apparently trapped with one or both of its propellant tanks still partially filled with liquid (or gaseous) methane and/or oxygen. An initial road closure scheduled from noon to 6pm local quickly came and went and SpaceX and Cameron County Texas have since modified the paperwork, extending the closure a full 24 hours. In other words, SpaceX has reason to believe that Starship SN4 may continue to be unsafe (i.e. pressurized) as many as ~30 hours after it technically completed its third static fire test – extremely unusual, to say the least.

There’s only one obvious conclusion to draw. Whether it was something invisible to the public eye or damage related to the off-nominal fire that burned for some 15 minutes after Raptor shut down, SpaceX appears – to some extent – to have lost control of Starship SN4.

I've tuned into the live feed a few times today, and there's no visible work being done.  The road alongside the test stand is closed (it was opened yesterday a couple of hours after the test) and the info panel says the road is scheduled to stay closed until 8AM (CDT) tomorrow.  There have been no workers to the pad since the incident.


Given that safety is almost certainly the priority, chances are that some combination of fairly mild hardware failure and telemetry/control loss has left SpaceX with just enough uncertainty that it can’t risk sending technicians to the launch site to inspect the damage and reestablish control. As a result, the only option left is to quite literally sit and wait until it’s once again safe to approach the rocket. Thankfully, at this point, the risk of the mystery problem actually destroying Starship SN4 is very low. If, as it appears, only its methane tank is affected, leaving some unknown quantity of latent liquid methane trapped inside, it’s possible that waiting will actually solve the problem and safe the rocket.

The fact that Starship hasn’t exploded yet strongly implies either that the amount of propellant trapped is minuscule or that the vast majority of SN4’s propellant management systems (including vents) remain functional. Assuming that’s the case, any remaining cryogenic propellant will eventually boil into gas, increasing the pressure inside Starship’s tanks, while those tanks will continue to vent to prevent an explosion or rupture. Eventually, Starship SN4 will be empty once again and SpaceX will be able to approach the rocket to regain control and begin inspections and repairs.

At some point, they're going to have to do something with SN4.  If they can't get to the pad at all for days or a week that throws a big monkey wrench into their operations.  It sounds like SN5 is either ready now, or not far from it, so it's possible that they'll swap the prototypes, but not if they can't work around SN4.  The next few days were supposed to include a hop to 150m (~500 feet) but that's on hold now.  If they were to scrap 4 and go to 5, they'd need to start the entire testing routine over.

Honestly, I don't see any problem with SN4 that a .308 couldn't solve, from far enough away.  One through hole, get rid of the residual gas (methane or LOX), and weld a patch over the holes.

In other space news, as I expected, SpaceX cancelled the Starlink mission which had been scheduled for early Tuesday morning and slipped it off until after next Wednesdays' historic Demo 2 mission.  When the stories started Monday morning about fairing recovery ships Ms Tree and Ms Chief were headed for shelter in North Carolina because of Tropical Storm Arthur, it seemed a foregone conclusion the mission would be rescheduled.  The other two ships on the mission, Go Quest and Of Course I Still Love You, stayed offshore and dealt with the seas from the storm.

Preparations continue for Demo 2 next Wednesday afternoon with the crew arriving at the KSC today for final preparations.


On Thursday, May 21, NASA and SpaceX will conduct a flight readiness review system to evaluate the Crew Dragon and deem it ready for flight. If the vehicle passes that, then on Friday, a static fire test will occur, followed by a crew dress rehearsal. On Monday, NASA will hold its final launch readiness review. If all goes as planned, Bob and Doug will board their spacecraft approximately three hours before launch. 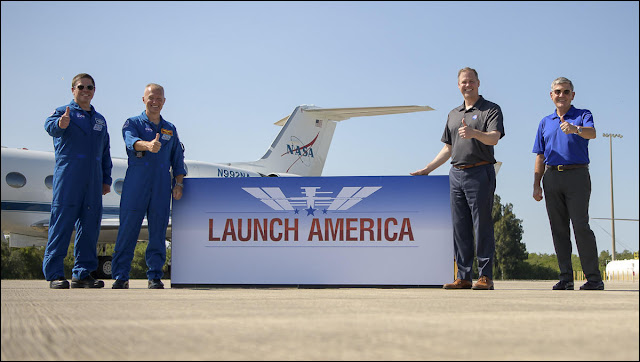 Liftoff is scheduled for 1633 EDT on Wednesday the 27th.  It has been a lot of years since I've seen one of these for a manned launch. 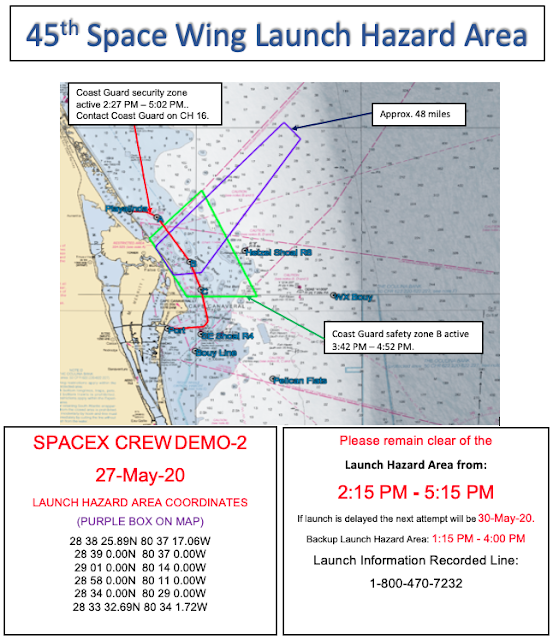