Seriously, I sometimes wonder why do I do these on the weekend?  The days when I could only work in the shop on the weekend are long gone, and I'm out there some amount of time every day.  I guess the reasons are twofold: first, not to overwhelm with every little thing I'm up to all the time, and second, it's the weekend and everybody's pace of posts is down, be it Sunday Music or just lower activity.

First item, the problem I mentioned about my Fogbuster not spraying seems to be resolved. I only ran it for a few minutes, but it behaved more normally in that test than any other time last week.  The problem, as a comment from reader Leigh suggested


Yeah, it sounds like the issue is between the needle and the outlet orifice of the spray head.

and it was.  I had noticed what looked like a line around the tip of the needle valve but assumed that would cause a leak - too much coolant not none.  I chucked the needle valve in the lathe and held a file against the taper briefly, then finished it with 240 grit paper, followed by 320, 500, then finally with Simichrome polish.

Next, I finished the counterweight that I included a drawing of last week. 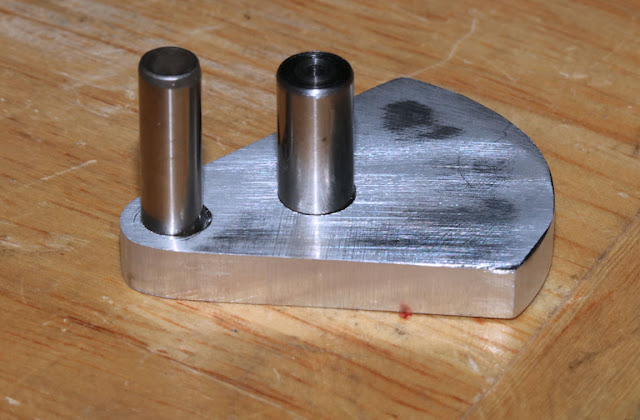 Those are 1/4 and 5/16" dowel pins in the two holes. They're not a press fit; you can lift the counterweight off them without moving them, if you're careful.

After that I spent time working on the approach to machine the rocker arm that gets controlled by a cam on that crankshaft.   The drawing looks like this, top view on top, face view on the bottom: 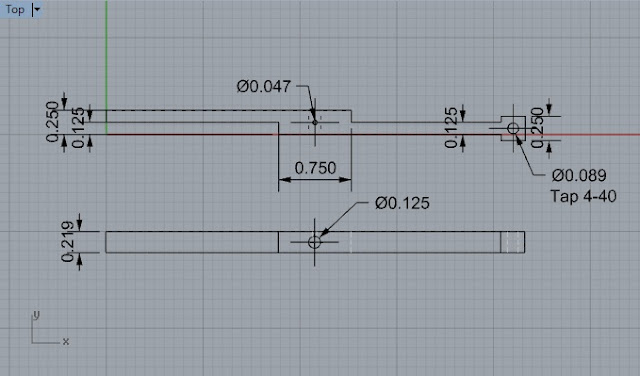 The other things I'm working on are some Tee nuts for the small (Sherline) mill, my version of a product made by a company that went out of business,  and a way to make an enclosure for a little ham radio project that doesn't involve hollowing out an aluminum bar and splitting 80% of it between the recycling bin and the vacuum cleaner.

Posted by SiGraybeard at 7:54 PM