Last time, I showed the piston rod and mentioned it wasn't Done done.  I needed to make a couple of small bearings out of bronze and the piston wrist pin.  I had made the wrist pin but grabbed a piece of the wrong size stock - the only piece of the 5/16 drill rod I had - when it was supposed to be 3/16".  I got started on the bearings and came to the realization I didn't have a reamer for the big one.  It's to be reamed to 0.281, or 9/32".  I ordered that last Sunday from an eBay seller and received it Thursday.

Now for the Ta Da! moment for the connecting rod with the bronze bearings in place. 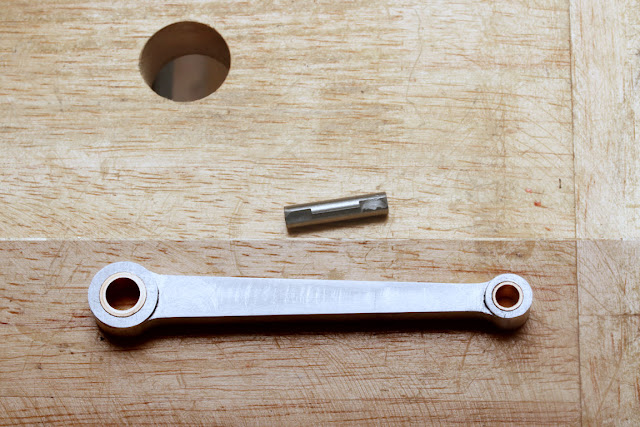 With the wrist pin alongside.

There's another piece I started and made good progress on, but it's not quite ready for its photographic session yet.  This is a beginner's engine and so a lot of parts are acceptable without touches that might be done on a more advanced engine.  One of these is on the crankshaft.  The shaft itself is called out as just a piece of 5/16" Cold Rolled Steel.  I found a piece of drill rod in that diameter at one of the metal dealers and that became the crankshaft.  The way the end of the crankshaft is drawn, this is unbalanced (left side of this picture shows the end).

I've seen various solutions to this; some guys use the square tab for the top and then go into a semicircle for the bottom.  That seemed like it would be trading one imbalance for another, so when I saw the idea on the right here, I thought I'd opt for that.  It's roughed out on the mill but not ready for prime time.

I spent some time on a problem with my Fogbuster cooling system.  It stopped misting the coolant although the air flow is normal.  I've done a couple of things to try to fix it and haven't gotten anywhere.  I cut out the outline of that sector of circle with no liquid, just the air blowing and while the aluminum chips didn't melt onto the cutter, the metal came out looking like I'm not used to seeing.  Shiny but looking ripply.  Almost as if it had melted and then quickly solidified. Some of the aluminum cut away was still warm when I picked the pieces up after cutting.  I don't think I'll be doing much cutting until I get that fixed.  Maybe some of the smaller parts on the smaller machines.