The reactions to my “Got a Question for You” post surprised me.  Mostly by the quantity; I don’t have a way to check but it’s in the top couple of comment generating posts I’ve ever put up.  Some of specific questions were a bit of a surprise, too.

One of the subjects that came up has a time sensitive aspect to it, so I’m going to take a look at  propagation; in particular E skip, or sporadic E.  It’s going on right now, as I write and we’re at or close to the peak time of the year for sporadic E; at least here in the northern hemisphere.

As usual, let me start at the beginning for those who aren’t familiar with it.  Both references are to propagation in the E layer of the ionosphere.  The ionosphere is called that because the air density is so low that individual atoms are far from each other, far enough that energy from the sun, mostly UV radiation, can cause electrons to be stripped from some atoms, giving rise to both negatively charged free electrons and positively charged atoms that can stay separate for long times.  The density of the air is so thin that it takes a long time for collisions between these ions to neutralize them.

The ionosphere is characterized by layers, conventionally called the D, E and F layers – in order of height.  If solar energy is high enough, the F layer can split into two layers called (imaginatively enough) F1 and F2. 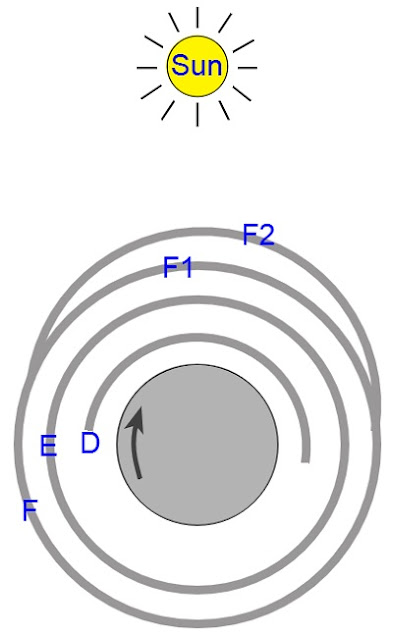 Because the ionization is driven by solar energy, the general rule is these layers appear in the daytime, and the highest levels of ionization are in the area where the sun is most intense; so midday and directly under the sun.  While the D layer getting denser during the day shuts down lower frequencies that tend to be open all night (say 160 through 30m), the higher frequency bands’ signals (20 to 10m) travel through the D layer to the F, so they open during the day and are shut down at night.  This isn’t like a switch, it’s a more gradual transition.  For example, it seems that 30 is intermediate between 20 and 40; most days it seems to open earlier than 40m in the afternoon, and close later in the morning than 40m.  Back around the Spring Equinox, I’d hear Australia on 30m – close to my sunset and their sunrise.

It’s probably generally known that solar activity - sunspots and higher Solar Flux Index – increases the density of the ionosphere, making the F layer propagation last longer into the night, sometimes completely overnight.  Bands that are only useful for local communications during sunspot minima can be open to somewhere in the world 24 hours a day at the peaks of the solar cycle.

E layer propagation is left out of that overview because it’s harder to fit in.  Sporadic E has been known for a long time, but that word “sporadic” in the name is an indication of the toughness of predicting when it will occur.  We know there’s no correlation between solar activity and Sporadic E; in fact, the last few years have made it seem that it could be inversely proportional to solar activity (my observation – I haven’t seen anyone else say this).  We know that the mechanism is fleeting clouds of sufficient density in the E layer, and that it tends to occur more at certain times of years than others (now in the northern hemisphere).  We know that it tends to form later in the day and linger into the evening; that is, you'd be more likely to find it at 3PM than 3AM (local time).  Finally, we tend to observe it on higher HF and lower VHF bands; 28 and 50 MHz are peak bands.  It happens on occasion on the 144 MHz band.  Hams have long noticed that sporadic E clouds seem to form above the tops of thunderstorms - long before mechanisms that could extend the charge into the ionosphere, such as red sprites or dark lightning were discovered.

3PM?  This is a plot of reported sporadic E contacts at 10:14 AM EDT, Saturday, on 6m.  Each arc is a reported contact between the two stations at the ends of the arc.  Most of those arcs are in places where it's 9:14 AM.  It’s impossible to read all the call signs in this screen capture; there’s simply too many. 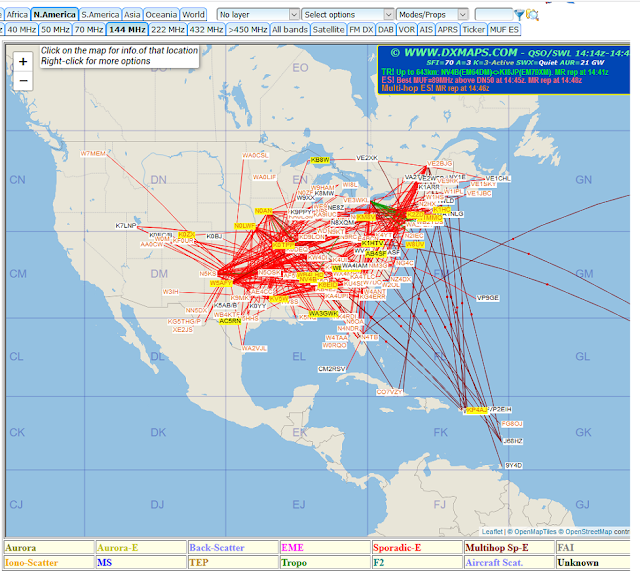 The plot is from a website I visit regularly called DX Maps.  This link should bring up this display for 6m over the US as of the moment you go there - I think those reports stay there on the order of a half hour.

The area in the east central US is blanketed by reported contacts.  There are many arcs starting in the Caribbean, (Puerto Rico, Guadeloupe, St. Lucia, Trinidad) going into the states.  As I write this, 11 hours later, the map looked much the same.  The density of the red traces (reported as Sporadic E, although always hard to know) is down, but the distribution is similar.  A couple of days ago, the concentration of red traces was over the western states: Utah, Wyoming, Montana, Eastern Oregon and Washington and virtually nothing on the east side of the country.  In other words, the opposite of this.  Another day, the east coast was full of paths reported into Europe, still another was full of paths reported from the west coast into Alaska and then Japan.  26 hours later, that previous plot looked like this: 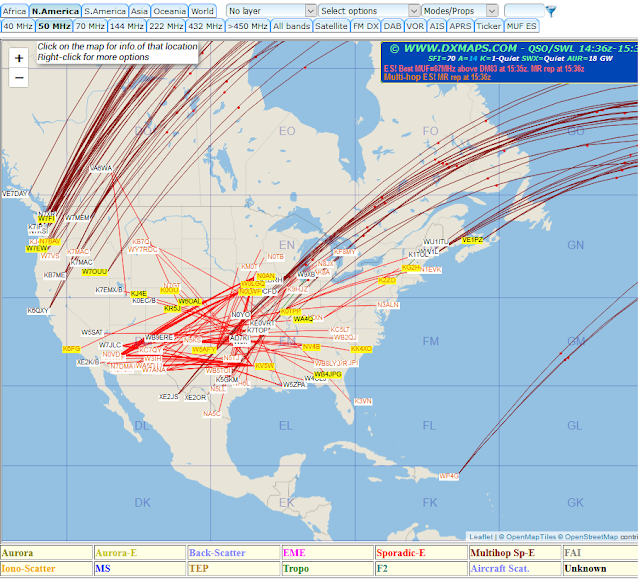 You can see the propagation to Europe marked by dark red arcs is dense into the NW US, with some into Mexico.

They call it Sporadic E because it’s not dependable or particularly predictable; you kind of know something is likely to happen, but don’t know what that “something” is going to be. It varies all day every time.  We know late spring into early summer is better than mid summer or mid winter.  I’m not sure that doesn’t vary with where you are.  I’ve heard from a guy between my location and the Space Center that around the Winter Solstice in December, he has worked 6m into New Zealand.  Note that’s around the equivalent of our first day of summer in NZ, in terms of heat and constancy of sunshine.

Because of that unpredictability, it’s fair to ask what practical use Sporadic E is.  I know of no systems that rely on it.  For hams, it’s mostly a way to rack up novel contacts that we don’t or can’t get any other way.  The band I’ve been on, 6 meters, is just below the bottom of the old VHF TV Channel 2.  A few days ago, I had a contact with a guy in Spain on 6m.  That’s similar to (while different in important ways from) watching Channel 2 TV from Spain and I get a kick out of the novelty.

I find the study of propagation one of the most interesting aspects of radio.