Have You Had Enough Stimulus? Part Deux

I've been beating the dead horse of creating money out of thin air for the life of this blog, so this is part two only in the sense of a post with a similar name in early April.

I heard today that House Democrats are working on another stimulus bill, this time in the vicinity of $3 Trillion.  It's all very preliminary at this point, but the Financial site The Motley Fool reports on what they're seeing in the early discussions.  Note that this is not an exhaustive list -- the actual bill is over 1,800 pages long and you can only imagine what sorts of handouts for favored groups are included in this.
Thanks to the first three (four? who knows?) packages, the US Debt Clock shows our total debt has ballooned to over $25.1 Trillion.  The Motley Fool isn't very confident that anything that passes the house will pass the senate and points out some obvious contentions, such as those last two bullet points.  That doesn't mean that something won't pass, though it's just a matter of how much pork gets pushed through.

In the first year of this blog, I used some visualizations from Demonocracy.info and I was pleased to find they're still there.  They present a series of pictures on the national debt (they stopped updating the numbers back in '17 when the total debt was a mere $20 Trillion.  Ah, the innocent days of our youth.)  Here's $1 Trillion in pallets stacked with $100 bills. 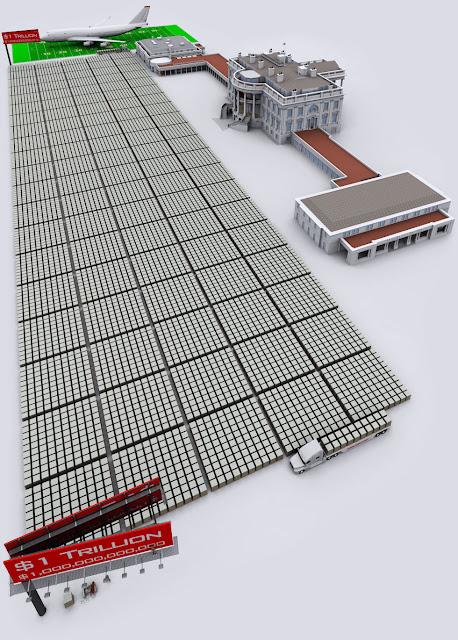 One Trillion Dollars.
Each of those cubes you see is a pallet of $100 million in $100 bills.  At the far end you can see an American football field with a Boeing 747-400 parked on it. You can see the White House with both wings to the right.

Just triple that area and you get the $3 trillion they're talking about for this spending bill.  Alone.

Look, I know that there's a lot of suffering out there, I just think this is exactly the wrong thing to do.  When someone has a compound fracture, you don't just give them a pain reliever; you fix the problem.  This is a band-aid.  We're doing Modern Monetary Theory and that's going to end in a worse disaster than we have now.  This could be the thing that destroys the economy and the entire western world.