“Loses” in the sense that it blew up so badly it's tough to figure out where all the pieces went. 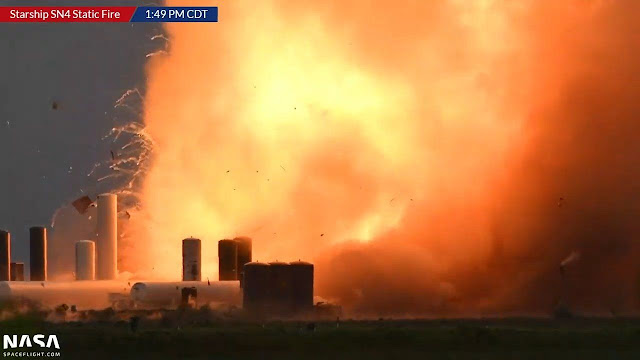 SN4 has survived more than any other Starship prototype; it has been on the pad since the end of April, had its first static firing on May 5th, and then another couple of static firings. After that, they replaced the engine with a newer Raptor, and static fired the new engine.  Yeah, they had a bit of a fire and had to wait a day to inspect and clear the area, but the damage was minor.  Yesterday, they added 55,000 lbs of ballast to it and static fired the engine again; then this happened today after yet another static firing.  A commenter to that Ars article said this was the fifth static firing of the second engine.


On Friday, SpaceX prepared its latest iteration of the Starship prototype vehicle, known as Serial No. 4, or SN4, for a static fire test in Texas. The Raptor engine appeared to fire nominally for a couple of seconds at 1:47pm local time and then shut down as planned.

However, about one minute after engine shutdown there was some kind of uncontrolled gaseous leak, and one minute later the vehicle exploded almost instantaneously—a truly rapid Rapid Unscheduled Disassembly.

RUD - for Rapid Unscheduled Disassembly - is a term that Elon Musk and his engineers seem to use regularly.  Personally, I hadn't heard it before, but I don't know they made it up.

I'm not going to speculate on what happened, but the vehicle is lost and the test stand appears badly damaged.  There will be a few days work and SN5, which has been ready for weeks, will be transported to the test area.

Too bad.  They got their FAA approval to conduct suborbital test flights yesterday after the successful static firing.  It looked like SpaceX would lay low, let Crew Dragon get to the ISS and then try a hop test of SN4.  Maybe even Monday, June 1.  That doesn't seem possible today. 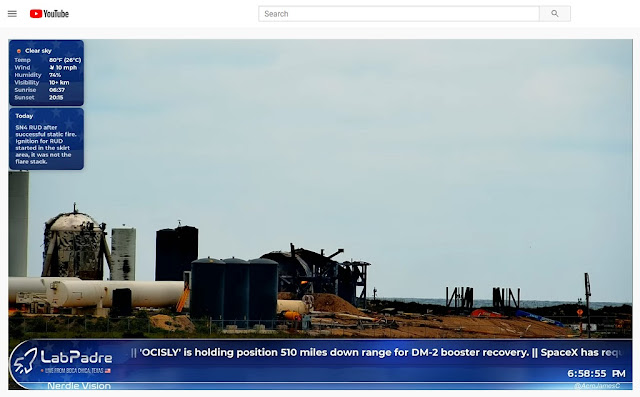 The remains of the test stand and much of the hulk of SN4.  A small flame is visible - orange, just left of center, a quarter of the way up from the bottom of the scene.