Starship Getting Ready to Hop

In the two weeks since I last posted about Starship SN4, SpaceX has continued to make progress, steadily checking off one test after another until now they're one set of tests short of waiting for the formality of approval to make the 150 m (~500 foot) hop flight.

In the two weeks since then, they've done a "wet dress rehearsal" and two short (~3 second) static test firings of the Raptor engine (first and second).  Then they pulled that Raptor engine off SN4 and did another cryo pressure-proof test that was done to higher pressures than the previous test: 7.5 bar (110 psi) versus the 4.9 bar test from two weeks ago.

Today we learn that they replaced the engine today, with a second Raptor engine, serial number 20, seen here.  Because that's a new Raptor, there will be a first static test of that engine, currently looking like it will be May 13th, with a test window open from 9am to 9pm CDT (UTC-5).  Backup days for road closures and such are the next two days. 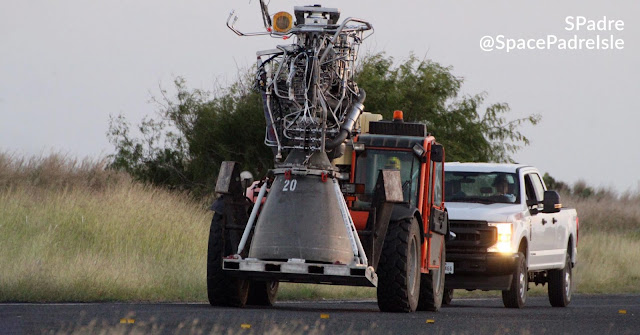 What's that up there?  The world's highest thrust per buck rocket engine, being driven down a beach road by a fork lift?  Must be Boca Chica and SpaceX.  That was yesterday morning.  Taking a look at the live video feed just now it seems like the engine has been mounted.

Final words to Teslarati, with one modification.


If that static fire and included wet dress rehearsal (WDR) is successful, Starship will technically be cleared for flight. The only obvious missing piece is an attitude control system (ACS). Starhopper, for example, used cold nitrogen gas thrusters quite literally taken off of flight-proven Falcon boosters. It remains to be seen if SpaceX will take the same approach with Starship SN4 or if a different kind of ACS thruster is already installed on the rocket and hidden in plain sight. For now, it looks like we won’t have to wait long at all to find out.