No, Governor Fredo, That's Not the Question

I heard New York Governor Andrew Cuomo deliver a soundbite yesterday that nearly made me spit.  When talking about keeping New York in shutdown until some mythical things happen, he's quoted in Reason saying:


"How much is a human life worth?" he asked. "That is the real discussion that no one is admitting, openly or freely. That we should. To me, I say the cost of a human life, a human life is priceless. Period."

No governor Fredo.  At best that's about half of the question.  Maybe it's a quarter of it.

Get this through your thick skull:  No Matter What You Do People Will Die.  Like when you ordered nursing homes to take covid positive patients in and killed more people in nursing homes alone than have died in total in all of my state (Florida)?  Like how 66% of patients with covid in NYC supposedly were isolated and staying at home - if it's even possible in NYC to stay in your apartment and not breathe the air from the whole building.  Or the whole block you're on.

The big question is whether what you're doing is saving more lives than it's costing.  Add up all the good things you're accomplishing, add up all the bad things you're causing and weigh them against each other.  You can't answer that because you don't know any of those except the death count.  You're looking at one thing and only one thing: the politics of your situation and if you can use that to your advantage.  What a surprise, right?  He's a politician.  That's what they do: they look for advantage and if there isn't advantage they blame someone else.

Oh, but you have models.  Ooooh.  You have computers.  I Don't Give A Shit.  If I had nickle for every time a computer model lied to me, I'd be a millionaire.

Let me put it this way: how much gets spent on verifying and improving those models every year?  How many independent parties have evaluated them?  Hundreds?  Thousands?  More like two college freshmen?  Have they ever been validated by independent testing or are they like global climate models that are never verified?  If there's no incentive to get models right, by testing them against the real world, finding what doesn't agree, modifying them and retesting, constantly, they won't be right.

Let me tell you how it works when there are real incentives.  For over 30 years I worked in a specialized engineering field.  Relentlessly ruled by physics, so it should be easy, right?  It's just Maxwell's equations; just run a simulation.   There were two competitors each of whom spent millions of dollars every year improving their models and having independent experts test and certify them.  The modeling systems got better every year and as a result we pushed the envelope.  We designed things that were more advanced and harder to model.  Has anyone ever put that kind of pressure on your models?

Cuomo is applying the evil fallacy that "if it saves one life, it's worth it," but that's only for the sound bites in front of cameras and microphones.  As author Jacob Sullum at Reason puts it:


"A human life is priceless" may sound like a nice sentiment, but its moral implications are grotesque. It requires us to ignore any amount of suffering that's not reflected in mortality statistics, as long as the policy that inflicts it can be expected to prolong even one person's life.

The fallacy implicitly means that you can do anything to someone as long as you don't kill them.  The implications reach a dead end when we have to consider the thorny questions like saving a life of someone today at the expense of denying elective surgeries for the last two months and thereby killing some number of new cancer patients who would have survived if they had gotten their cancers removed before they spread.  That's balancing the probability of saving some number of lives today by increasing the probability of killing some number of other people in the next couple of years.  But some of the people you save today will also die within the next couple of years.  Not so straightforward is it, governor? 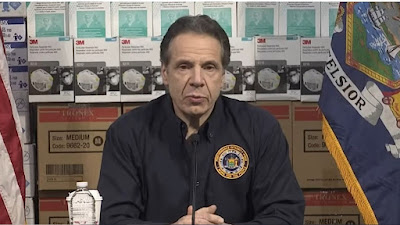 Governor Andrew "Fredo" Cuomo at a March press conference.  I only call him Fredo because I understand he hates it.  If that's wrong and I'm only insulting his brother, I'm OK with that.