I'll do a weekend shop update today, since it all transpired earlier in the week.

When we last talked, I was just about ready to cut the connecting rod after spending too many hours troubleshooting something that I might have remembered if it hadn't been 10 years since I last had to think about it. Once I got the coordinate offset resolved and verified it with a quick cut in air above the part, it was easy to cut. 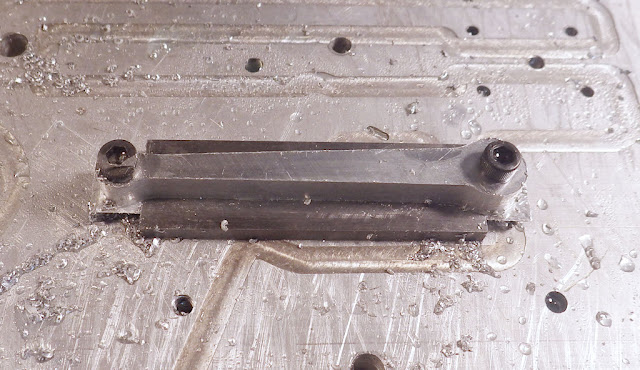 You'll note some thin flash metal looking like square tabs on both ends that hadn't been cut off on the final pass.  I fastened the rod down with 10-32 cap screws on top of a 3/16 thick piece of scrap steel and the piece deformed under the clamping pressure.  I didn't worry because my plan was to cut a circular arc around each end and I assumed when I turned the part over, those would get cut away.

The design called for the bulk of the rod to be thinned by 1/32" on both sides with a nice circular arc around the now thicker ends.  I wrote the G-code to cut the circular arcs around both screws (and the path between them) by hand and tested the code with the software I have for that.  The results were as intended. 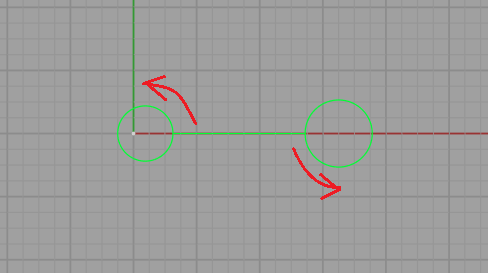 Each smaller grid square is 1/4" on a side, and the green lines show the center of the 1/2" diameter cutter, so 1/4" offset from the part.  The red arrows are drawn in to show the direction of the cut from where the cutter starts.  I can count squares and see the dimensions look right.  So I took it to Mach 3 to do an air cut.  This is what Mach3 thought the motion should look like: 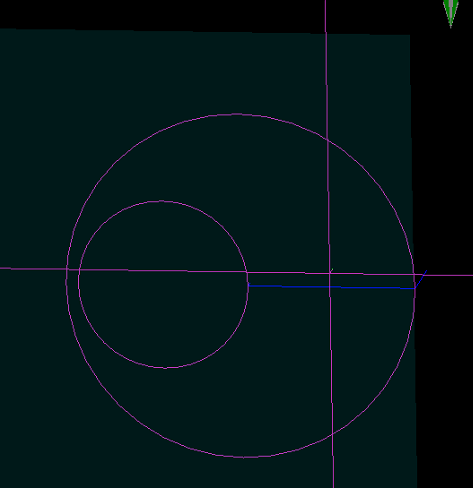 Without the grid squares it's hard to know that the small circle on the left is the right size, but the circle starting on the right (end of the blue line) is very obviously wrong.  It's cut in the wrong direction and way too big.

The code runs correctly in the testing program but not on Mach3?  Aren't they speaking the same language?  Well, yes and no.  As with the CAM program, Mach3 had a default command I hadn't found.  The code it self is simple.

Once I found that in the Mach3 manual, it was easy to see what was going on and change the code so that it cut properly.  The cutter goes to the right side of the left circle on the X axis and cuts it.  When it's done, the cutter is in the middle of the connecting arm again, so I send it to the right circle starting point.  This thins the bar by 1/32" as well.  Finally the right circle is cut.  Take out the retaining screws, flip the piece - this time attaching it directly to the table - reset the Z zero for the 3/16" lower work piece and run the circle cutting program again. 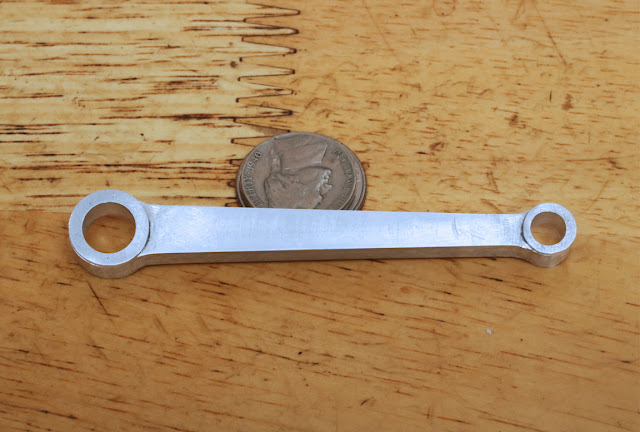 I spent more time sanding and cleaning up the part than it took do the cutting.

I have a few small pieces to work on next.  I started today and they're going pretty well if I remember to RTFD (D for Drawing).  I cut one the wrong size already.

There's a few dicey parts that I've never done anything like before but most look like things I know how to do.  There's at least a full page of parts for a DIY carburetor, but Webster (the guy who designed the engine and gave away the plans) has a drawing note that says (in essence) do yourself a favor and don't build this carburetor; just go buy an RC model car carburetor.  I'll probably take his advice.  I'm told the magic words are “Traxxas 4033 carburetor.”