Date Set for Next Launch of DOD's X-37B Space Plane

Next Saturday, May 16th, is the next launch of the DOD's X-37B space plane on an Atlas V rocket from Cape Canaveral Space Force Station, according to Space News.


Randy Walden, director of the Air Force Rapid Capabilities Office, said the upcoming X-37B mission will be the first to use a service module to host experiments. The service module is an attachment to the aft of the vehicle and “enables us to continue to expand the capabilities of the spacecraft and host more experiments than any of the previous missions,” he said in a statement.

One of the experimental payloads is FalconSat-8, a small satellite developed by the U.S. Air Force Academy and funded by the Air Force Research Laboratory. The FalconSat-8 will carry five science payloads. There are also two NASA experiments to study the results of radiation and other space effects on a materials sample plate and seeds used to grow food. A U.S. Naval Research Laboratory experiment will transform solar power into radio frequency microwave energy which could then be transmitted to the ground.

Hmm.  The concept of putting enormous photovoltaic panels in space, converting the solar power to microwave energy and beaming it down to huge arrays of antennas on the ground has been out there for at least a couple of decades.  Usually referred to as Space Based Solar Power, it has become a stated goal for Japan, China and Russia.  I used to call it "the Microwave Design Engineers' Full Employment Act."

There are sound reasons to do that.  First of all, the atmosphere doesn't pass all the energy that solar panels in space would get.  In addition, space-based solar panels aren't subject to the big efficiency killers that ground or roof-mounted panels are affected by: windblown sand and dirt, or bird droppings.  To ensure the power beams are safe enough to walk through or for aircraft to fly through, the power per square meter has to be the levels that safety authorities already approve. Or the system architects have to provide good arguments why it can be higher, presumably by ways of keeping people out of the energy beamed down.

This is the first experiment I've heard of to validate the concept.

By the way - that second quoted paragraph might well be the most the Air Force has ever said about an X-37B mission, especially in advance of the mission.  The X-37B is the "mini-space shuttle" clone that was developed before the shuttles stopped flying, with its first mission in 2010.  The craft has put in very long duration missions.


The design and landing profile of the X-37B — weighing about 11,000 pounds and nearly 29-foot long — is similar to NASA’s Space Shuttle but it’s one-fourth the size. The most recent mission OTV 5 was launched Sept. 7, 2017 on a SpaceX Falcon 9 rocket from NASA’s Kennedy Space Center. It landed on October 27, 2019. 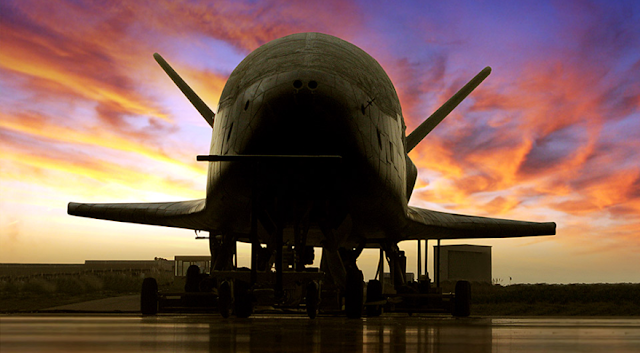 Taking a look at the long range forecast, don't plan a trip to Central Florida to see this launch.   Next Saturday looks to be rainy all day.