Ordinarily, detonation isn't a really good thing to be have going on in a rocket engine or much of anything in life.  Obvious exceptions for blasting sides off of mountains, mining and military.  There's a difference between explosions and the controlled blast of a rocket engine but the detonation holds out a tantalizing prospect. It appears that the explosion could lower the cost of the engines, make engines simpler, so more reliable, and lower their weights by perhaps 30%.  That in turn would make a launch vehicle's payload that much bigger.

This week's Wired reports on research into Rotating Detonation Engines being carried out at the University of Central Florida.  Coincidentally, UCF is located pretty much due west of the Kennedy Space Center, although closer to Orlando than the KSC.

It turns out this isn't really a new idea.


Rotating detonation engines, or RDEs, sound like something out of science fiction, but the concept is about as old as the space age itself. In the late 1950s and early '60s, aerospace engineers working on rocket engines envisioned RDEs as a way to turn a problem into a solution. “Sometimes the rocket motors would get a real bad instability and you’d get an explosion,” pioneer Arthur Nicholls recalled in a University of Michigan interview shortly before his death. “Then it led to the idea—well, what if we use that?”

Professor Nicholls noted the problem was an instability in the combustion chamber and saw the potential in creating an annular channel, a ring, in which a continuous shockwave propagated around the ring in a continuous explosion.  He was able to produce working models, but the understanding of the physics behind the behavior was lacking and the experiments were dropped as conventional engines became more successful.

RDEs use fuel and oxidizer, like other liquid fuel engines.  The savings come from the details.  In conventional liquid rocket engines you're familiar with, the fuel and oxidizer are pressurized and fed into the ignition chamber using bulky turbopumps and other complicated machinery. An RDE doesn’t need these pressurization systems, because the shock wave from the detonation provides the pressure.

Fast forward to this century and the idea resurfaced for hypersonic missiles and aircraft in the atmosphere.  Professor Kareem Ahmed, director of the Propulsion and Energy Research Laboratory at UCF, has spent the past few years developing a next-generation rocket engine that uses controlled explosions to boost stuff into space.


In the RDE developed by Ahmed and his colleagues, hydrogen and oxygen are fed into a combustion chamber. A small tube is used to send a shock wave into the chamber, which triggers the detonation. As the pressure wave moves through the chamber, it encounters more hydrogen and oxygen being fed into the front of the engine by dozens of tiny injectors. When the detonation wave hits the fresh fuel and oxidizer, it rapidly raises the temperature and pressure of the gases. This causes them to combust and send a flame shooting out of the rocket engine.

Earlier this month, Ahmed and a team of researchers from the University of Central Florida and the US Air Force published the test results from the first rotating detonation engine to use hydrogen and oxygen for propellant. This chemical cocktail is regularly used to propel the upper stage of a rocket on the final leg of its journey to orbit. But Ahmed says that many engineers believed this chemical mixture was too volatile to be used in a rotating detonation engine. “Hydrogen is a crazy fuel,” he says. “Most believed it wasn’t possible to detonate hydrogen and oxygen, because it would tend to deflagrate like a typical rocket engine, rather than a detonation motor.”

The effort to better understand and model the processes in the engine has been aided by modern technologies being better able to study the process as it's happening.


The number of waves produced by the engine is determined by how much propellant is being pumped into the system. The engine built by Ahmed and his colleagues had five waves, but other RDEs have had up to eight. It’s still unclear how the number of waves affects the performance of the engine, which will require a better understanding of the waves themselves. To study the waves produced by their engine, Ahmed and his colleagues added a chemical tracer into the propellant and filmed the engine using a high-speed camera rolling at over 200,000 frames per second.

The speed of the explosion is "wicked fast"; the wavefront is going around the ring at 4000 miles/hour, and they're concerned about movement of a centimeter.  That takes about 1.4 nanoseconds (billionths of a second). Ultra high-speed cameras are required.

In 2018, the Air Force Research Laboratory announced a program to develop and fly an RDE that used conventional rocket propellants. The engine developed by Ahmed’s team is a result of that program, and he says the Air Force is aiming for the first flight of an RDE engine by 2025.  As part of that effort, James Koch, an interim postdoctoral researcher in applied mathematics at the University of Washington, began working on simulating the physics in the engines.


To overcome the challenges of working on RDEs, engineers rely on computational fluid dynamics to create detailed simulations of the detonation process. This is the same computing technique also used to design new planes, submarines, and rockets, but modeling a rotating detonation engine pushes a supercomputer to its limits. “It’s a very nitty-gritty, brute force approach,” says Koch. “The Department of Defense has been running simulations on rotating detonation engines that take on the order of three weeks to a month to run on their leading supercomputer.”

Koch was determined to find a better way to model the detonation waves, so he turned to a branch of mathematics called nonlinear waves and pattern dynamics, which uses math to create models that describe how patterns form. When Koch and his colleagues fired up a small rotating detonation engine they built in their lab, Koch found that the fundamental physical processes occurring in the engine could be described with his mathematical models—no supercomputer necessary. “This approach worked really well,” Koch says. “I can run a simulation on my laptop that takes maybe 30 seconds to produce results that are similar to what took the DOD three weeks.”

This combination of bits of progress around the country is re-igniting a lot of interest in RDEs.


RDEs may have a lot more to offer than improved rockets. The US Department of Energy is investing in research on using RDEs for stationary power generation, and companies like General Electric are exploring their application to jet engines. But Ahmed says these systems will first be put to practical use in rockets because there’s so much to gain in reduced weight and fuel efficiency. After 60 years of effort, exploding rocket engines might be just about ready to blast off. 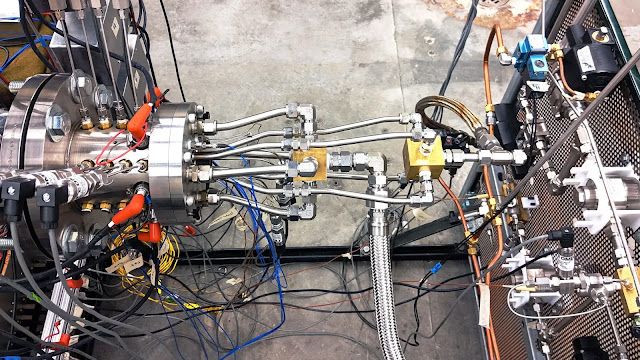 An engine from James Koch/University of Washington.  It's interesting that in the midst of this amazing apparatus, anyone who has changed a spark plug will recognize the spark plug boots on the left.