This morning's launch attempt for the X-37B was scrubbed, currently rescheduled for tomorrow morning at 9:14 local.

The possible tropical or sub-tropical storm has developed to be Tropical Depression #1, also pretty much as expected.  I'm a little surprised that Tomorrow morning's 3AM scheduled launch for the SpaceX Starlink mission 8 has been rescheduled for Tuesday morning, according to the local fish wrapper.  As that link says, Tuesday is cutting it close, especially with seas in the category of "partly to completely crappy," which the storm brings.  Booster recovery ship OCISLY was on location waiting for the launch as of this morning. 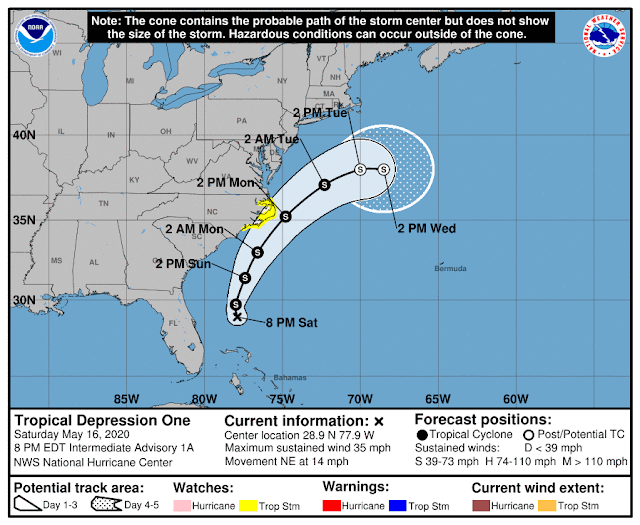 NOAA/National Hurricane Center graphic.  The "S" just north of the 8 PM Sat spot indicates they expect it to be a named storm by the next forecast.  That will be Albert.

A tropical storm before the start of the season isn't unusual. As a rough guess, I'd say it happens every other year; maybe every third year.  The one thing I'm a little surprised at is that it happens while we're having the mildest May I can recall. We're coming out of a 10 day period where a solid week never made over 80 degrees for the high. The forecast for Memorial Day is for a high of 84; granted that's a 10-day forecast which isn't the most accurate, but I recall a lot Mays that had afternoons in the 90s by about the end of the first week, and the every-afternoon-quitting-time thunderstorms starting by then or the next week. As it is, the only day in the Forecast with a high touching 90 might be Monday (day after tomorrow), although the official forecast is 89.