It seems that one of the most popular things people wanted to read about was propagation.  That's a tall order for a couple of reasons: the first is that it's a very broad field; so broad that many books have been written about it.  So broad that none of it is applicable to every amateur radio band, but that some aspects can blend for different bands.  So broad that experts in one area can study nothing but that area and still not predict it perfectly.

Propagation is concerned with getting radio signals from one user to another.  It's not all ionospheric; I'm not even sure I'd say it's all atmospheric, but most is.  At low frequencies, say below HF (defined as 3-30 MHz), much signal propagation is by conduction along the ground - the ground wave.  There's a ground wave at HF too, but it's much less prominent than the AM broadcast band and lower in frequency.  HF is where the ionospheric propagation is most influential.  In the entire electromagnetic spectrum, there is one piece of spectrum that allows worldwide communication without man-made infrastructure; that place is the HF spectrum.

Most hams have probably seen a diagram somewhat like this one at some time:

It shows that as the signal leaves the transmit antenna, it splits into two components, the ground wave and the sky wave.  If the ionosphere is dense enough, from a variety of factors, the sky wave can be refracted by the electrically charged ions in the ionosphere, and come back down hundreds or thousands of miles away.  That signal coming back down can reflect off the earth, or especially the ocean, and go back into the ionosphere again - called multi-hop. Underneath that area where the signal is depicted going into the ionosphere and refracted back down, nothing can be heard.  This is called the skip zone; the signal skips over the vast path under that curve.

A problem with this depiction is that it gives the impression that if we could be above that radio path and look down on it, it would be straight on some compass heading.  That's not always true.  The signal path can bend.  Narrow beam width HF antennas are extremely big and expensive (for most of the spectrum) so there's little experience with it.

The radiation angle from the transmitter matters a great deal; if the angle is too high, above a critical angle for the ionosphere, the signal path will get refracted by the ionosphere, but not refracted far enough to come back down to the ground, so it travels off into space.  This graphic was published in Electronics World for April, 1969 and posted by RFCafe.  Signal paths above the critical angle are seen on the left. 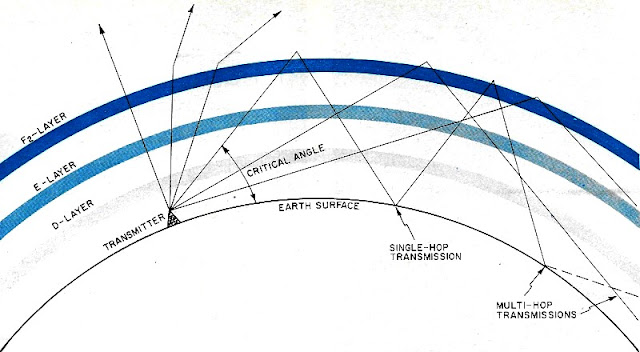 The radiation angle is a property of the antenna, including how it's mounted and the area around it.  People trying to work stations the farthest away always emphasize getting a low angle of radiation, pointed pretty much at the horizon.  Look at the bottom ray leaving the transmitter on the left.  Because it's so low, it reaches the ionosphere the farthest point from the transmitter and while we can see it coming back down, that's so far to the right we don't see it.

This is not to say that the ionosphere is the only way we have of getting signals from Here to There.  F layer skip pretty much disappears above 6 meters (50-54 MHz) - and isn't that high often.   Sporadic E, talked about last time, is regularly heard on 6 and occasionally as high as 2 meters.  Most of the time, signal propagation on 2 meters is in the lowest layer of the atmosphere, the troposphere.  Weather conditions cause the possibility of ducts to form in the air that keep the signals from going straight (and out of the atmosphere) by bending them down toward the Earth as they travel.  There are attempts to predict this based on weather modeling that post plots of the chances of tropospheric ducts.

Tropo ducting is the dominant way of propagating VHF and UHF, up into the microwave spectrum.  A friend of mine once experimented on the 10 GHz amateur microwave band and used to tell the story of testing his small (3 feet diameter) microwave dishes on the beach, from near Cape Canaveral talking with another guy down near Ft. Pierce, Florida (around 70 miles).  He'd say when there was no duct it was very hard to get the dishes pointed precisely and hear the other guy, but when a duct formed, it was very easy.  Sometimes it almost didn't matter where the dish was pointed.

The troposphere has another trick called Scatter.  Think of blasting a high power VHF signal into the sky and listening to what bounces back, as if it were some sort of radar.  Troposcatter has been used by the military.  There are such things as rain scatter, and aircraft scatter, where signals bounce off airplanes traveling in heavily traveled corridors.  Meteor scatter is a routine mode of communications, especially now with fast digital modes like MSK144 to take advantage of meteor trails that aren't very long lived.  I'm sure there are others I haven't thought of.