One of Those “That's Funny” Stories

Every so often you see stories in the news that make you say, “that's funny” and then disappear.  You wonder what's really going on but while you'd expect more followup stories, those just don't show up.

There was a story like that over the weekend but today I'm only seeing it on PJ Media.  The Associated Press reported on Friday that a huge explosion had occurred that rattled Tehran and lit up the horizon. The site of the blast was a region where many nuclear experts believe Iran conducted high-explosive tests relating to its nuclear program.

The explosion happened in the Alborz mountains, just east of the city and appear to have come from the Khojir Missile Base in Iran. There is some Twitter back and forth about it, saying that the Iranian regime is trying to say it was somewhere else, when open source, commercial satellites clearly show some differences at the Khojir Missile Base. 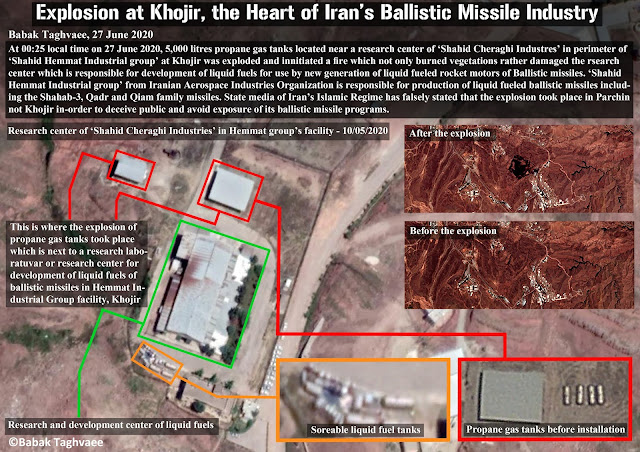 If that's what happened, 5,000 liters (about 1,300 gallons) of propane could make quite a boom, but propane isn't typically used as a rocket fuel.  That's not to say that it couldn't be used with the proper design trades, just that generations of actual rocket scientists have looked at the trades and don't consider it a worthwhile fuel.  If it's the only fuel you have, it can burn, it's just not as good a rocket fuel as methane.  The most up-voted answer at that previous link is:


Propane, with ~5-7 bar vapor pressure at ambient temperatures would require a pressure tank (not acceptable on a rocket due to mass), or needs to be cooled to at least -42oC. This combines disadvantages of cryofuels and complex hydrocarbons, giving a very small specific impulse rise over RP-1, and while rather large, still insufficient boiling point rise above methane.

In my limited perspective the pieces don't add up here.  I think it's entirely possible that thousands of liters of propane went boom, I just don't think that it's likely they're developing rockets based on it.  I'm assuming that if there was any indication that was nuclear, somehow that news would leak out, but there are uses for other explosives in a nuclear warhead that could also have gone boom.  I'm left where I started, with a “that's funny.”