It has been almost three weeks since I posted an update.  I ended up spending more time than usual in the ham shack instead of the metal shop last week.  The parts I'm working on are either small or fiddly or both.  Let me show you some of what I've been up to. 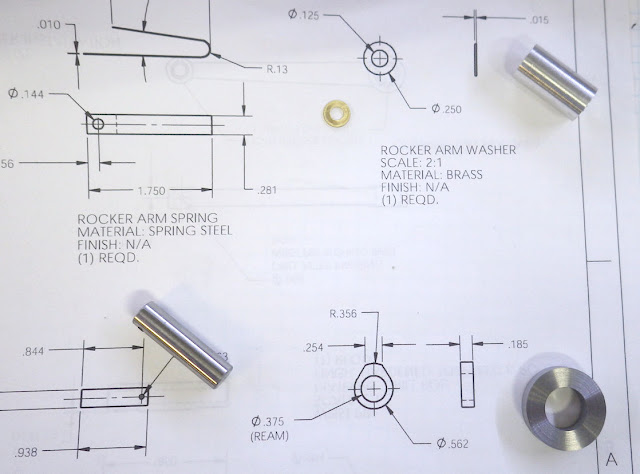 The top piece is the simplest, but still a fiddly bit.  It's a washer made from brass rod that's 1/4" OD with a 1/8" hole down the center.  It's easy to do this; the only touchy operation is cutting off a .015" thick sliver of a brass rod with a 1/8" hole down its center.  The cutoff tool usually leaves a nib that has to be trimmed off and then the whole thing needed to be lapped on sandpaper to bring the thickness down about .003".  I could make washers like this and sell them, but one of these would cost you the same as a box of 1000 stock washers.  It's kind of silly to make things like this.

The piece at the lower right is the blank for the cam pictured just to its left.  I've never made a cam like this and there's a couple of ways to make them.  The plans I'm using recommend using a method developed by a guy named Hamilton Upshur, which requires building a fixture to turn the cam eccentrically - that is, off the centerline of that big 3/8" reamed hole in the center.   I had no idea what that fixture needed to be until I found a video that's one of a series where this guy takes you through building an entire engine that Upshur published.  Late in the video, I got a good look at some prints he kept using, paused the video, screen captured the frame and improved its appearance. 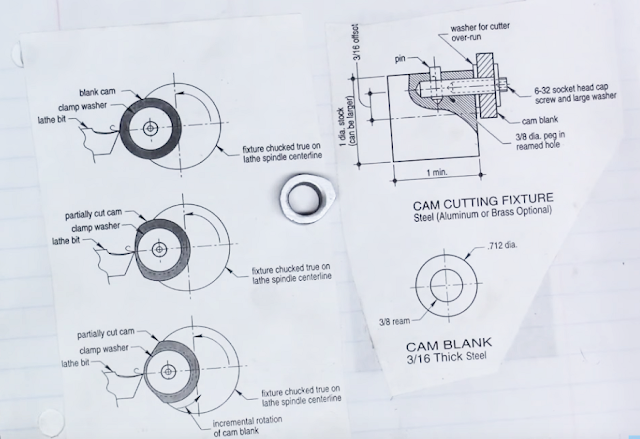 The fixture I'm making is at the upper right.  In the first picture, the 3/8" "peg" the designer calls out is lying on the top right edge of the print; the big 1" diameter cylinder that holds the peg is waiting to be drilled for it on the mill.  The peg is through-tapped, 8-32 instead of 6-32 because I prefer 8-32 screws.  Tomorrow, I should be able to complete the fixture and maybe make my first attempt at the cam.  A finished cam is in the middle of this screen capture, and it looks very much like the one I'm trying to make.  With this method, the cam is largely machined by hand; the fixture just makes it easier to hold the work for those odd cuts.

There's another method for cutting cams that has been shared by a home engine modeler named Chuck Fellows, and his video details how he got there.  It seems a bit fussier to set up than this, but probably gives a more controlled shape.  Fellow's method fixes the cam blank on a rotary table which then moves for all the cuts while Upshur's method uses a lot of hand work; tighten down the screw that holds the blank in place, make a cut, loosen the screw, change the blank's position, tighten the screw, make a cut, and repeat.  Over and over.

The topic of making cams is of great importance for engine manufacturers, especially generating the curves mathematically.  I've read several things on this, including equations that can be plugged into an Excel-compatible spreadsheet.  Take this exercise:  the green circle is the starting blank; the big white circles cut the left and right flanks; the center points where the center of a boring head should sit while rotating to cut those big white circles are computed and displayed.  The boring head is cutting an inside diameter, not an outside diameter. 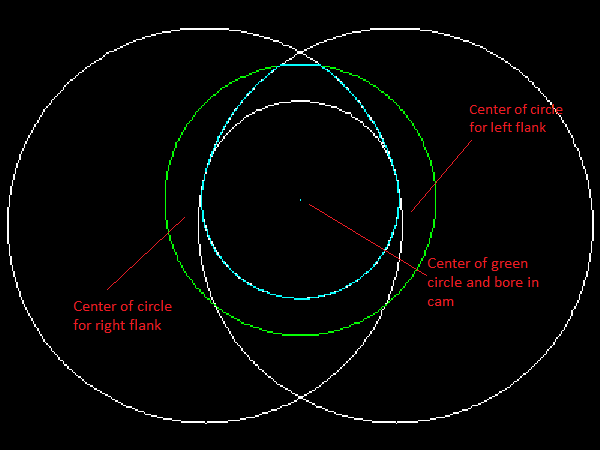