Tiananmen Square - The End of Limited Freedoms in China

Thirty one years ago today, June 5th, 1989, the symbolic resistance of the so-called Tank Man took place in Tiananmen Square in the People's Republic of China.  Ironically, this event that was taken as the symbol of the protests in the West took place after the protests were largely over and the protesters largely massacred. 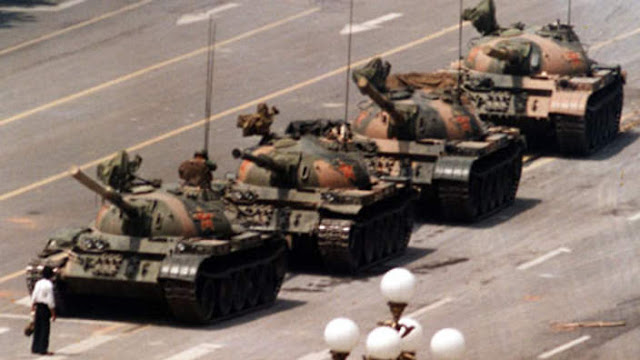 The resistance of this never-identified man was celebrated widely by the west as a successful resistance to the power of the column of tanks but was preceded by the Chinese Government massacring an estimated 10,000 of their citizens for the Tiananmen Square protests on the night of June 3-4 in Beijing.  The folks at Ammo.com, have written a worthwhile piece on the event, the history leading up to it and since then.  It deserves reading.


The lead tank tried to maneuver past the man, but was met with nonviolent resistance. The man repeatedly shuffled in front of the tank to obstruct the tank’s path. After a while, the lead tank stopped in its tracks and the armored tanks behind it stopped as well. From there, a short pause began with the man and tanks remaining in a standstill.

The video footage then shows the man climbing on top of the tank’s turret and chatting with a crew member and the tank’s commander. After having a conversation, the man jumps back down and gets in front of the tank again. The standoff between the man and tank continued until two figures in blue came out and pulled the man to the side. To this day, witnesses at this event are unsure about who pulled the “Tank Man” to the side. Furthermore, the identity and fate of the man is still unknown, although there has been speculation that he was either executed or fled the country shortly thereafter.

I don't think “executed or fled the country” are mutually exclusive.  If he fled the country, he could well have been tracked down and executed.  If he survived that, he's probably smart enough to never tell anyone that he was that man.  I doubt we'll ever know the story.

Milton Friedman once observed that economic freedom generally is a precondition for political freedom, but that's hardly a law of nature.  People who have had a taste of genuine economic freedom may develop hunger for political freedom, but the Chicom technocratic dictatorship is not likely to do anything for that hunger.  Tiananmen Square itself was the result of protests for more freedom and against the emerging class of insiders who made enormous profits through connections with the Chinese Communist Party, a problem to this day.

In the years since the Tiananmen  Square massacre, the Chinese Communists have created one of the most monitored and tracked societies on the planet.  Facial recognition systems feed into their Social Credit Score system made in the US by Google and Facebook; it is, after all, based on what those companies are doing to conservatives here in the US.  The Chicoms, of course, have gone beyond that to putting Muslim Uighurs in re-education camps, to widespread condemnation from international human rights observers.  There are reports of organs being harvested from living, healthy, people to sell on the transplant market.

The Tiananmen Square protests were disastrous for the Chinese people.  A protest for increasing liberties led to the elimination of most freedoms and the introduction of the world's worst surveillance state.  (well... maybe)   It led to the massacre of whoever was in that square the night of June 3rd and 4th.  The only argument for the protests is that it might have wound up this way regardless.