For the second time, SpaceX Starship test article Serial Number 7 was tested until the new steel structure failed.  This was a deliberate test to failure, unlike the first test nine days ago, which just popped a leak. 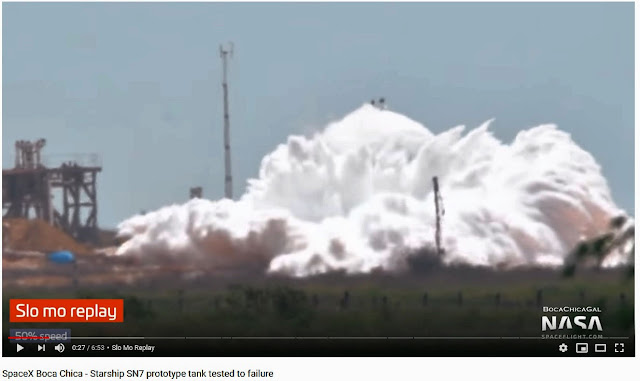 That's a screen capture from this NASASpaceflight.com video.  A look at the wreckage from up close later in the day shows that the bottom of the tank blew out pretty extensively.  You can see the tank and test stand lift off and fly to the left in the video (and in that picture above).  The two dark objects sticking out of the highest spot in the white cloud is a pair of valves that were releasing LN2 vapor.  The test consisted of closing those valve and then monitoring the pressure build up until the tank blew.  This was deliberately destructive test to see what fails and at what pressures. 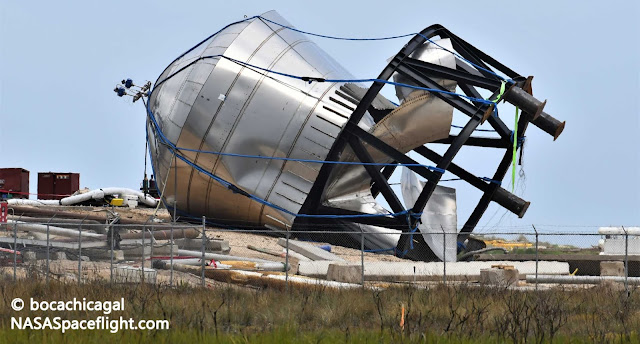 There is no SpaceX data release telling us how well the tank performed.  The working pressure that tanks have been tested to is about 125 pounds per square inch (PSI), which is a 40% safety margin over the worst anticipated flight conditions, but those are not intended to be destructive tests.  Whether or not the tank survives that pressure for some time is the criteria.  This is more a test of everything, the sheet steel, the processes, and their understanding of all of those.

The destructive test was yesterday around lunch time; I missed the failure but had kept the tab open in my browser.  When I went back the tank didn't look as good as the second picture and I rewound the video to see the pop.  Early this morning, the full sized test vehicle SN5 was rolled out to the test stand and mounted on the stand while the remains of SN7 were being cleaned up.   There don't appear to be any road closures for another several days, which indicates no testing at least until then.  The next road closures are for Jun 29th through July 1st.  I've watched the channel enough to know those dates are extremely fluid.

Meanwhile the third Starlink mission in as many weeks is scheduled for tomorrow at 1639 EDT, 4:39 PM.  This has slipped a couple of times, with no explanation I can see.  Like the last mission, this will be a ride share flight, and a couple of Starlink satellites will be pushed off to a later mission to accommodate the first two BlackSky satellites from Washington startup LeoStella.  Those ride sharing photographic satellites are believed to weigh around 55 kg (~120 lb) each.  The booster for this flight is B1051 and is scheduled to become the third SpaceX rocket to launch five times when it lifts off.  Only one has successfully landed and been recovered; B1049 from the first Starlink mission of this month is in the inspection and refurbishment process now.