We Were Treated to a Spectacular Launch This Morning

This morning at 5:21 AM EDT, the 8th bundle of SpaceX Starlink satellites launched into the night sky and we went out to watch from the side yard as usual.  The launch was the most visually spectacular launch either one of us could recall, and as Teslrati author Eric Ralph suggested, probably led to reports of UFOs and strange lights in the sky all along the east coast.


Through a confluence of orbital dynamics and luck, SpaceX’s seventh Starlink launch of 2020 may have created one of the most spectacular light shows visible across the US East Coast in recent memory.

Likely to incur a massive wave of ‘UFO spottings’ across the Eastern seaboard, Falcon 9 lifted off from a Cape Canaveral, Florida launch pad at 5:21 am EDT (09:21 UTC), a bit less than a half an hour before dawn. Heading east (and up), the 70m (230 ft) tall SpaceX rocket took just three minutes to escape Earth’s shadow and meet the rising sun a bit ahead of the East Coast’s schedule – the light from which instantly backlit the plume created by Falcon 9’s second (upper) stage. Effectively replicating – in reverse – a similar phenomenon often seen after SpaceX West Coast launches shortly after sunset, this is the first time in quite awhile that the stars have (somewhat literally) aligned for a similar light show in Florida.

Mrs. Graybeard and I have lived near the Cape Canaveral/Kennedy Space Center complex since 1982.  Years ago, we concluded the prettiest launches are when it's dark on the ground and the rocket goes into sunlight as it climbs.

Local sunrise is 6:26, and we're in the week of the earliest sunrise of the year.  The rocket appeared to go northeast, but stayed visible through the end of the second stage burn making it into orbit.  During daytime launches that's never visible.  Visually, when it got to first stage cutoff and dropping the booster, it was still a bright spot in the dark.  Moments after the staging occurred, the second stage moved into sunlight and the exhaust plume started to light up.  For the next several minutes, we watched this glowing, bluish circle enlarge around the bright rocket, and we could see the first stage brightly illuminated by the sun basically tracking along the same path but below it, clearly dropping away from the second stage and payload.  At this point in the flight, the rocket is traveling on a gentle slope into orbit, moving mostly straight away from us, so it's approaching the horizon and getting lower in the sky as we watch. The peak height in the sky from our vantage point is probably around where the first stage cuts off and gets dropped. The glowing bluish exhaust cloud eventually got to around 30 degrees diameter when the second stage cutoff.

Teslarati published a long exposure of the launch, but because it collects several minutes worth of light, it doesn't really capture what it looked like. 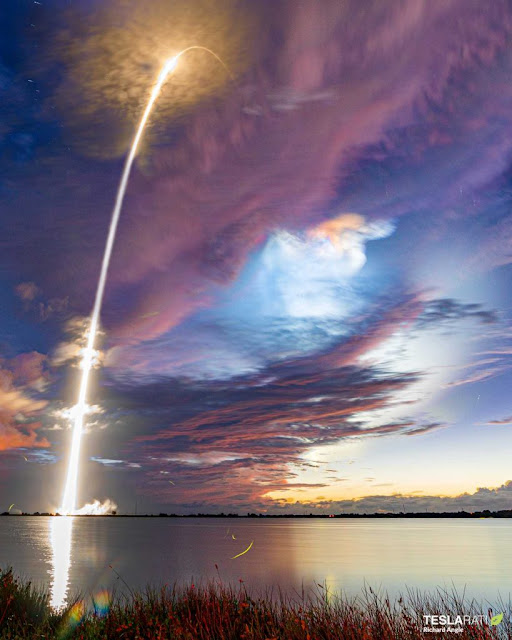 After the second stage cutoff (SECO), we came back into the house, went to SpaceX on YouTube  and replayed the launch through first stage recovery on their drone ship, then stayed with it through the satellite deployments.

It's worth noting that this launch was different than other Starlink Launches.  SpaceX has started a Ride-Sharing service for small satellites, sending three ~110 kg (242 lb) Planet SkySat imaging satellites on the way to their final orbits, “for a price so low that the company initially didn’t believe it could be real.”  The cost to SpaceX was to reduce their usual load of 60 satellites down to 58.

Next launch of a Starlink mission is currently No Earlier Than the 22nd, a week from Monday.  That's a late afternoon mission, 6:20 PM, so no chance of a repeat of the light show.