Getting Things Into Orbit is Hard

With the big guys doing it regularly, it's easy to lose sight of the fact that space flight is hard to do.  Everybody who thinks of it understands that safety margins are slim and launch vehicles are controlled barely-controlled explosions.  Most companies that develop a new rocket fail to reach orbit on their first attempts, even after exhaustive testing on the ground.


“LauncherOne maintained stability after release, and we ignited our first stage engine, NewtonThree,” Virgin Orbit said. “An anomaly then occurred early in first stage flight. We’ll learn more as our engineers analyze the mountain of data we collected today.”

The rocket was carried aloft from Mojave Air and Space Port in California by the Boeing 747 mothership, named “Cosmic Girl.”

The article doesn't say when the 747 took off, just that the release was at 2:50 PM PDT, and the anomaly occurred within the first three minutes of flight.  The aircraft landed at 4:26 PM, so about 1hr 35 minutes later.  That implies a takeoff around 1:25 PM.


Chief pilot Kelly Latimer, a veteran test pilot, flew the the 747 through the rocket’s drop box, then entered a race track pattern to loop back around line up for launch on a southeasterly heading.

In the final moments before release, she maneuvered the airplane to pull up at an angle of about 27.5 degrees. The launch team aboard the plane then commanded release of the 70-foot-long (21-meter) rocket from a pylon under the aircraft’s left wing at 2:50 p.m. EDT (11:50 a.m. PDT; 1850 GMT).

Virgin Orbit did not livestream Monday’s launch attempt, but the company provided near real-time updates on Twitter. After confirming release of the LauncherOne rocket, Virgin Orbit followed up three minutes later with a tweet saying the “mission terminated shortly into the flight.” 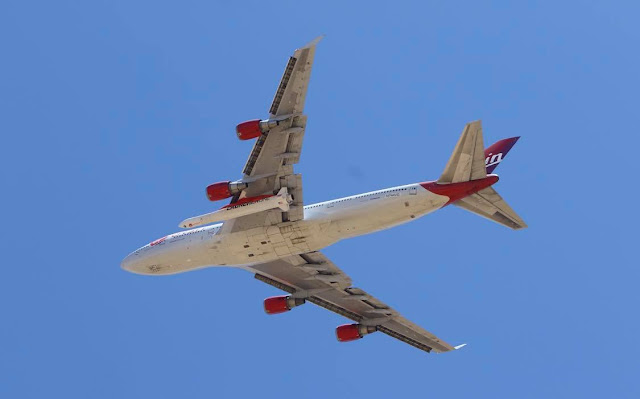 Imagery from National Weather Service radar in Los Angeles appeared to show a debris cloud in the vicinity of the LauncherOne drop zone at the time of the rocket’s release.  Those two words (debris cloud) are probably the last descriptors you ever want applied to a rocket launch you're working on.

Virgin Orbit is in tough competition to get into the small satellite launch business before it fills up.  Currently, Rocket Lab is the most successful of the newcomers in the smallsat business.  Firefly Aerospace aims to fly its new Alpha rocket into orbit before the end of this year.  SpaceX has come up with an arrangement they call Ride Sharing.  SpaceX says it charges as little as $1 million to share a launch as a piggyback payload of up to 440 pounds, or 200 kilograms, with a primary payload on a Falcon 9 rocket.  I've seen the cost of a Falcon 9 listed as $50 million, but I've also heard costs can vary and experienced boosters are cheaper than new ones.

I thought it showed camaraderie in the business for the CEOs of Rocket Lab and SpaceX to tweet encouragement to the Virgin Orbit team. 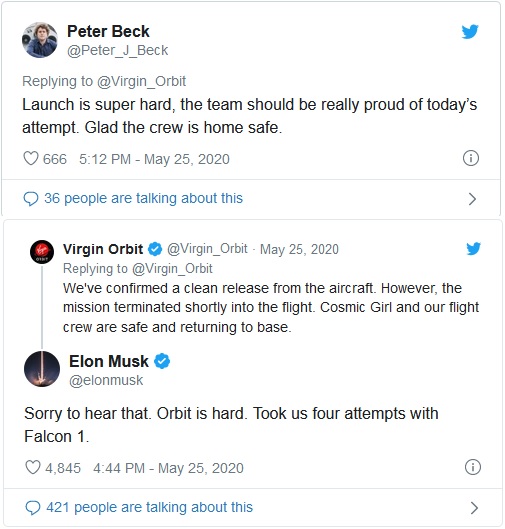 Virgin Orbit says the main test objectives were to launch the vehicle and start the engine, perhaps observing stable flight, making it a successful test flight but you've got to know they really hoped they'd make it all the way to orbit.

So congratulations to everyone at Virgin Orbit, and here's hoping for more successful, longer missions soon.