The SpaceX Falcon 9 at 10 Years Old

Last night, we got the chance to watch SpaceX launch their Starlink 8 mission on top of booster B1049; the booster and rocket performed flawlessly and the booster successfully landed on their drone ship Just Read The Instructions (JRTI).  This marked the first time a booster has been recovered after flying five times and brings them another notch farther in their life testing of the Block 5 boosters, designed to fly ten times.  SpaceX President and COO Gwynne Shotwell says that they may be able to fly more than ten missions without massive refurbishment.

At the end of the Webcast, the Engineer doing the commentary casually mentioned that today is the tenth anniversary of the first Falcon 9 launch.  I recalled doing a story on the 10 year anniversary of the Falcon, but that was the first flight of the Falcon 1.  That 10 year anniversary was less than 2 years ago, September of 2018, so in less than two years, SpaceX went from a booster powered by one Merlin engine to the nine of the Falcon 9.  From that itty bitty booster on the left of the family tree to the second one. 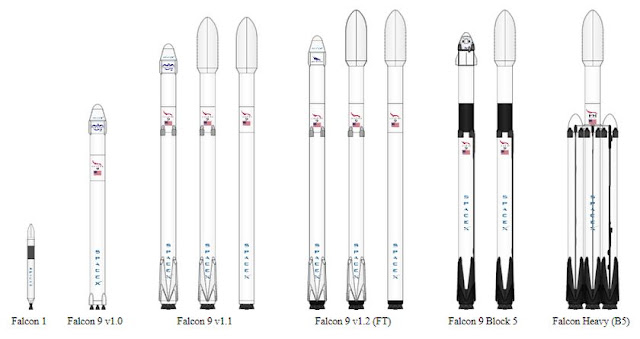 As in that first article, I'm basing this on a piece by Eric Berger on Ars Technica.  Eric says, “Forget Dragon, the Falcon 9 rocket is the secret sauce of SpaceX’s success.”  His point is good; in the last week, the Crew Dragon capsule has gotten the attention of millions of people, but what has made SpaceX into the competitor they are is the outlandish engineering of the Falcon 9.

The article isn't long and is definitely worth going to read, but I usually excerpt a few things to whet your appetite in pieces like this, so this will be no exception.  Berger starts with a story that sums up some of the things behind that success.  He begins on June 3, 2010; as often happens, thunderstorms had come across the cape that day, the day after the vehicle had been moved to the launch pad and gotten clearance from the Air Force to launch on the 4th.  This was a humongously huge moment for the startup company, looked down on by old line NASA for being "cowboys".


Four tall lightning towers protected the rocket from strikes during the rains, but post-storm checkouts revealed a weak telemetry signal coming from antennas on the Falcon 9 rocket's second stage. Water from the day’s downpour must have gotten into the electronics. This was a potential showstopper for the next day’s launch attempt; it had to be fixed. To do so, the launch director, Tim Buzza, drove out to the launch pad with the company’s founder, Elon Musk, and a senior director of avionics, Bulent Altan.

They arrived at the launch pad well after dark, and the Falcon 9 rocket had already been lowered from its vertical launch position back into a horizontal configuration.

Altan, who knew the avionics system as well as anyone, climbed a ladder to where the antennas were located on the second stage. He removed a cover to assess the damage, confirming that rain from that day's storms had gotten into the rocket's electronics. Overhead, bright lights shone down. Below, dozens of eyes stared up at Altan.

So now what?  Do they roll the booster back into the hanger and give up their launch position?  Swap out the electronics?  Nobody liked those ideas, so they tried a decidedly lower tech solution.  Someone got a hot air gun, virtually a blow dryer.  Altan went back up the ladder and blew hot air onto the electronics until it seemed dry.  Then he applied silicone sealant (RTV) onto the seams to keep moisture out.  What was that about cowboys?

At 2:45pm local time on June 4, 2010, the first Falcon 9 rocket blasted off from the Cape Canaveral Air Force Station.  When questioned about flying the rocket after drying out the electronics with a hot air gun, Musk replied, “I've done crazier things than dry out a radio antenna.”


The booster has etched a number of superlative firsts, from vertical landing and subsequent reuse, to flying into orbit with a record nine first-stage engines. And then there is its cost. At the time of its debut a decade ago, SpaceX offered a basic launch on the Falcon 9 rocket for $50 million. After a few incremental increases, since 2016, SpaceX has listed the base Falcon 9 price at $62 million. This put tremendous pressure on competitors in the satellite launch industry.

On the figurative shoulders of the Falcon 9, the US has gone from having virtually none of the world's commercial launch business to having about 70%, according to NASA administrator, Jim Bridenstine.  I've reported it here a few times; the world can't keep up with the US - largely SpaceX. Last year, Arianespace announced development of a booster copied from remarkably similar in appearance to the Falcon 9, after saying there was no sense in making a reusable booster because it would put people out of work.  China has been working on recovering boosters - so that they don't drop them on small villages anymore.  It has been noted their boosters feature grid fins like the Falcon 9 boosters do.

Imitation is the most sincere form of flattery.

The engineering behind landing boosters on a ship at sea is worth studying on its own.  I've run across one video on the subject from a channel called Real Engineering.  Between 2013 and 2017, SpaceX improved their landing accuracy by a factor of 1000x.  The video describes how they perform landings.