The More That Covid-19 Gets Studied, The More It Looks Like a Paper Tiger

That's the conclusion of NPR, of all places, quoted in the Foundation for Economic Education (FEE) news mailing.  The conclusion is surprising for them, but not how they start - which is to discredit the W administration and the '03 war in Iraq.


The Iraq War WMD debacle is arguably the greatest expert “fail” in generations. The holy triumvirate—lawmakers, bureaucrats, and media—all failed to sniff out the truth. If any of them had, a war that cost trillions of dollars and claimed the lives of 100,000-200,000 people likely could have been avoided.

It would be difficult to surpass the Iraq blunder, but emerging evidence on COVID-19 suggests the experts—again: lawmakers, bureaucrats, and media—may have subjected us to a blunder of equally disastrous proportions.

They go on to say that mounting evidence says that the coronavirus is more common and less deadly than it first appeared.  Originally, the claims for the numbers who would die were wildly terrifying, and you probably know the many times those estimates were revised downwards.  Neil Ferguson, professor of mathematical biology at Imperial College London, predicted millions would die in the “best-case scenario.”  As FEE points out, Neil Ferguson said in 2005 that up to 200 million might die from bird flu worldwide.  About 100 did.  Not 100 Million; 100. A bit too much reliance on models that aren't too accurate.

Similarly, Infection Fatality Rates were pegged in the 3 to even 5% rate.  In reality, no study I see says it's over 1%.


"The current best estimates for the infection fatality risk are between 0.5% and 1%," says Caitlin Rivers, an epidemiologist at the Johns Hopkins Center for Health Security.

Among people under age 70, a median Infection Fatality Rate of 0.04%  The horrific death rates from New York Generalissimo Cuomo shoving patients with Covid-19 infections into nursing homes can really skew those numbers.

The main thrust of Dr. Ioannidis' paper is that the lockdowns were - at best - unnecessary, and could have done more harm than good.   This is a theme coming out of research all around the world and that I reported on a month ago (almost to the day).  Marko Kolanovic, a physicist and strategist for JP Morgan, pointed out that a majority of nations saw declines in infection rates after the lockdowns were lifted. 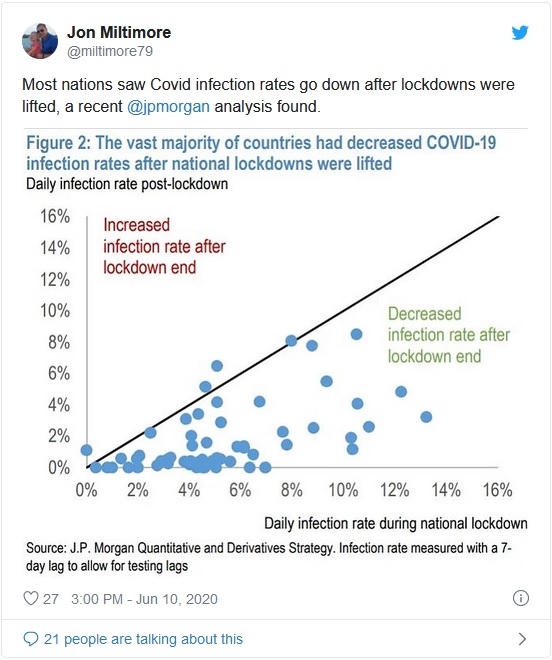 As I said in that post a month ago, early on when people first started talking about this virus, before the lockdowns, before much information was out, I pretty quickly concluded that eventually everyone other than the very few people living hundreds of miles from human contact will get the virus and develop antibodies to it.  Some people, obviously, will die and every death is a tragedy.  Thankfully, it looks like well over 99% will recover from it just fine.


Early on in the spread of the disease, it was pretty easy to come to the conclusion that eventually everyone on earth will be exposed to this.  It's a new virus, and new viruses jump from animals to humans pretty regularly; it's simply how the world works.  I don't have strong numbers to base this on, but I believe the nationwide downward trend in new infections will continue downward, this numbers guy says the worst of the epidemic is over, but the virus will be back next fall.  It's my understanding that coronaviruses, as a group, are hard to create vaccines for.  The common cold is one of many such viruses that we're always exposed to, for example, and there's no good vaccine for the common cold, right?