Arianespace, the European space consortium, had a launch at 8:52 PM Monday night (EST) of one of their Vega rockets that failed to achieve orbit.  It was the second failure of a Vega in two years, after a spotless six years of service.  The vehicle was carrying earth observing satellites for both France and Spain; both satellites were lost.


The Vega is designed for relatively small satellites, typically handling total weights in the area of about 1,000 kilograms (2200 lbs), though it can lift heavier items into lower orbits or take lighter ones higher. The trip to space is powered by a stack of three solid rocket stages; once in space, a reignitable liquid-fueled rocket can perform multiple burns that take payloads to specific orbits.

Although the solid rocket stages operated normally, when the liquid-fueled stage ignited to push the satellites into their desired polar orbits, something went wrong.  According to Roland Lagier, chief technical officer of Arianespace, the problem started the moment the stage ignited.


However, “straightaway after ignition” of the upper stage, he said, the vehicle started to tumble out of control. “This loss of control was permanent, inducing significant tumbling behavior, and then the trajectory started to deviate rapidly from the nominal one, leading to the loss of the mission.”

Analysis of the telemetry from the mission, along with data from the production of the vehicle, led them to conclude that cables to two thrust vector control actuators were inverted. Commands intended to go to one actuator went instead to the other, triggering the loss of control.

Ouch.  That kind of human error is always exasperating and especially when it takes out a mission.  The entire infrastructure around launches is aimed at catching operator error like this.  Everything: quality inspections, the workers performing the connection signing off on every operation, stamping the work to verify it agrees with the requirements, everything.  Picture two cables marked  1 and 2, or something, that are supposed to go to connectors marked the same way.  Instead of seeing 1 connected to 1 and 2 to 2, it was 1 to 2 and 2 to 1.  And it got by. 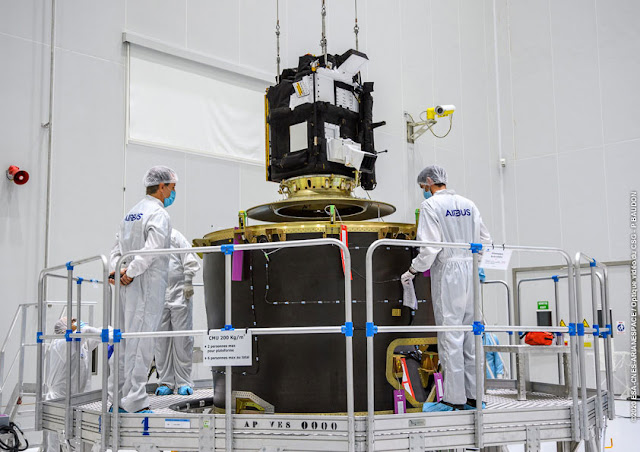 One of the satellites that was lost, while being readied for launch. Arianespace photo.


Yesterday, Elon Musk announced in his Twitter feed what the failure analysis showed as the root cause of the problem with SN8 that led to dripping molten metal and the other things I talked about last Friday.

As I understand it, martyte is a ceramic filled epoxy intended to help fireproof and protect the area under the test launch pad. Moments after this tweet, he added that avionics cables would be moved to steel pipe shields and they would be adding water-cooled steel pipes to the test pad.  He also stated that an overview of the Starship development program will be delayed to account for some “notable” design changes.  While we're all looking forward to seeing Starship and SN8 flying and proceeding in development, this all seems like things that must be done.  After all, the Raptors are producing up to 200 metric tons (~450,000 lbf) of thrust each and an exhaust stream traveling some 3.3 kilometers per second (2 mi/s, Mach ~10).  Don't leave anything loose under the vehicle that you ever expect to see again.

It originally seemed to me that this is the opposite kind of problem that Ariane had with their Vega. It's not a human error like swapping two cables, it's more a design error of picking the wrong materials for the launch pad (the martyte) or not anticipating what can go wrong. On second thought, I don't think it's that simple. It could be the martyte wasn't the right choice of material, but perhaps it would have been fine if it was mixed or applied differently.

Teslarati author Eric Ralph is optimistic that we may see testing resume before the end of the year. From the information I've seen, including the chatter by the full-time (or nearly so) observers on the Lab Padre cameras, the vehicle has already been fixed, with the one damaged engine replaced already. If any design changes are known to be coming, especially to the vehicle itself, it would seem to be best to incorporate those before any more attempts.