I Prefer a Different Name

SpaceX booster 1049, designated as B1049-7 to denote having flown seven times,returned to Port Canaveral today to come ashore for its journey to the booster refurbishment facility and then back to another flight.  NASA Spaceflight has a camera set up at the port now to catch the return of all boosters and fairings that come back.  They're calling it SpaceX's sootiest booster yet, and that's the name I propose changing.  That video is an hour and a half video, by the way.  It's unedited, just the camera stream as it happened, but you can skip around in it and look at anything you'd like.  You should look around the video for a recovered faring on a truck - around 1:11:00.  I was startled by the size perspective. 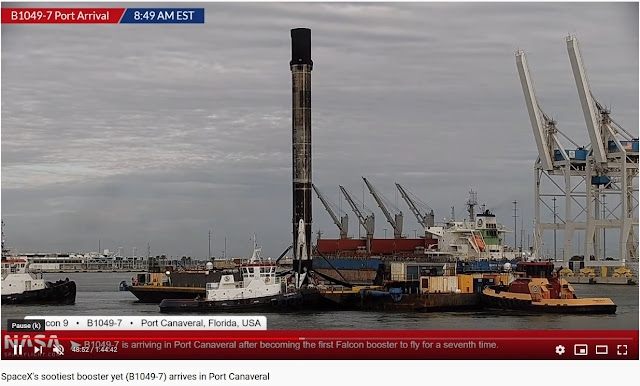 This screen capture was right before the moment where Lando Calrissian and Han Solo stumble out of the base of the booster, obviously hung over and each blaming the other for getting caught.  NASA Spaceflight calls it SpaceX's sootiest booster, but that's not really soot.  The black is scorch marks from its trips.  The straight lines are cleaned areas to allow inspection of weld lines - part of the inspection between flights.  It's just a used spaceship.

Since it's not really soot, I think I'd call it the Millennium Falcon, probably the best-known used spaceship.  A nation of Star Wars freaks would be in awe.

The rumor out of Lab Padre is the launch to 15 km is still scheduled for Monday, but the Temporary Flight Restriction notice (TFR) has not gone through, and the weather isn't looking good for Monday either.  I checked the National Weather Service Weather Prediction Center since we're getting our strongest cold front of the season Monday and I thought perhaps they're getting it too.  That would be unusual, and it doesn't seem to be the case.  Tuesday and Wednesday have road closures scheduled as back up to Monday.  I'll be checking in on the channel to see if the overview changes or the schedule gets confirmed.