Tuesday Was a Make Up Day

On Sunday I posted that SpaceX had scheduled a static fire test of Starship Prototype SN8 for Monday the 23rd, but Sunday night itself there would be a Falcon 9 launch "up the road" at 9:56 PM.  The launch was scrubbed Sunday night and Monday they never achieved the static firing.

As you might gather from the post title, Tuesday was the day to make up for the missed milestones and there was both a successful and uneventful static firing of number 8 and a successful launch of 60 more Starlink satellites, marking the seventh successful flight (and recovery) of B1049.  If you want to watch it in lots of detail, a video of the SN8 static firing from NASA Spaceflight (.com) is available.  Elon Musk says the static firing was nominal and the vehicle is cleared for the 15km test flight on Monday.

The mission video from the Starlink launch is here, queued up to start at T-1 minute before launch.  I've grabbed a screen capture from the video a few seconds after the booster landed; long enough for the camera to recover from its shock of going from photographing the ocean at night with a few lights on to a rocket's plume 90 million f-stops brighter, and then a few seconds for the smoke to clear so you can see the booster standing there. 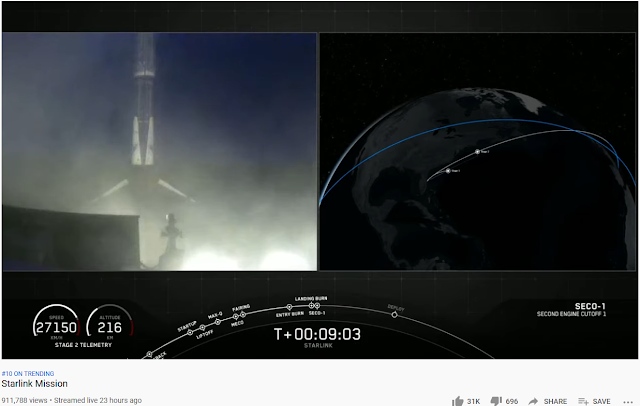 The only bad aspect to me was that at launch time for the Starlink mission, it had clouded over badly and we saw absolutely nothing.  Maybe the clouds in the direction of the mission got a little brighter.

Getting back to Texas and the Starships, a quote from the Teslarati article linked earlier is worthwhile.


Having now spent more than a month at the launch pad, it’s increasingly unlikely that SpaceX will continue to choose caution first for upcoming Starship SN8 tests. As Musk recently noted and easily visible from public roads, SpaceX’s Boca Chica factory is developing an extraordinary backlog of giant steel rockets. Just today, November 25th, Starship SN9 (featuring “small improvements”) was officially reached its full 50-meter (~165 ft) height after SpaceX kicked off nose section installation. In simpler terms, if SN8 is destroyed during testing, Starship SN9 will likely be ready to roll to the launch site almost as soon as the pad is clear.

Meanwhile, Starship SN10 is likely just 7-10 days away from a similar nosecone stacking milestone and Starship SN11’s tank section is just one stack away from completion, likely putting it less than two weeks behind SN10. In other words, insofar as speed is a priority and each prototype is anywhere close to as cheap as Starship’s majority-steel bill of materials, SpaceX is building the rockets so quickly that it almost doesn’t make sense to spend more than a few weeks working through any given ship’s bugs.  Bold added: SiG
....
It doesn’t come as a huge surprise, then, that Musk has given SN8 – warts and all – a 33% chance of successfully launching, ‘skydiving’ back to Earth, reigniting one or more Raptors, and landing in one piece. The only real certainty is that regardless of the outcome, Starship’s high-altitude launch debut is guaranteed to be spectacular.

My mind is officially blown.

Most of you will read this on Thanksgiving, which is tomorrow at the time I'm posting this.  Let me take a moment to wish you and yours a happy and blessed Thanksgiving!  I'll be taking the day off and be back on Friday.