You should pardon me, but given the story which will emerge I have to do this story in Dave Barry mode.  You see, 50 years ago, on November 12, 1970 a beached whale in Oregon became a legend in broadcasting.  For people there, it became somewhat of a horror story.  For most of us, it became a comedy legend.  Either way, the video is one of the highlights of human history.

I swear I'm not making any of this up.

Exactly how Dave Barry became involved in this story is a story of its own.  In the early days of the Internet, we're talking 1990, Dave heard about the story, saw the 20 year old video, and wrote a piece for his humor column in the Miami Herald's Tropic magazine section.  For details, we have to go to a website called The Exploding Whale.  The existence of a website with that name speaks volumes about the story's appeal. They reprint Dave's story in its entirety (it's shorter than I remember).


The following article was written by syndicated humor columnist Dave Barry of the Miami Herald newspaper. Even though the exploding whale event took place in 1970, Dave Barry didn’t actually hear about it until 1990, after which the incident began to receive much broader attention. The story was considered an urban legend by most people, though. By 1994 the exploding whale had worked its way onto the Internet in the form of an uncredited version of Dave Barry’s article. Amazingly, many news bureaus actually reported the incident as though it had just happened.

The TV station that broadcast the activities, KVAL in Eugene, also has a website devoted to the whale story.  Paul Linnman, who thought he was getting only the biggest stories in the Portland/Eugene area was assigned to the story.


"It had to be said the Oregon State Highway Department not only had a whale of a problem on its hands," Paul Linnman reported for KATU a half century ago. "It had a stinking whale of a problem."
...
"I was getting good assignments and so when they asked me to go to Florence to cover the disposal of a whale, I went 'whoa, wait a minute - I'm boy wonder here. I do bigger stories. Send somebody else,' " he said. "Then they said they were going to use dynamite and I said 'OK, let's go.'

The plan was to obliterate the whale into tiny pieces that seagulls would eat.

But as Linnman and former KATU Photojournalist Doug Brazil found out, the pieces were not exactly bite-sized.

The two had to run to escape the flying blubber.

One chunk of airborne blubber proved so big it flattened a car.

"It came down as this oil rain on your jacket," Brazil said in 2010. "It was horrible and the smell - it was just sickening."

"If I think about it, I can still smell that smell," said Linnman.

The smell was only part of it. 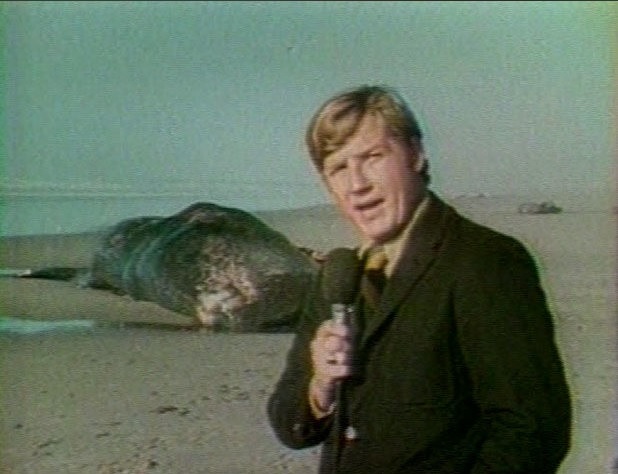 John Linnman in 1970, with the soon to be "parted out" whale in the distance behind him.  KVAL photo.


So they moved the spectators back up the beach, put a half-ton of dynamite next to the whale and set it off. I am probably not guilty of understatement when I say that what follows, on the videotape, is the most wonderful event in the history of the universe. First you see the whale carcass disappear in a huge blast of smoke and flame. Then you hear the happy spectators shouting “Yayy!” and “Whee!” Then, suddenly, the crowd’s tone changes. You hear a new sound like “splud.” You hear a woman’s voice shouting “Here come pieces of… MY GOD!” Something smears the camera lens.

Later, the reporter explains: “The humor of the entire situation suddenly gave way to a run for survival as huge chunks of whale blubber fell everywhere.” One piece caved in the roof of a car parked more than a quarter of a mile away. Remaining on the beach were several rotting whale sectors the size of condominium units. There was no sign of the sea gulls, who had no doubt permanently relocated in Brazil. This is a very sobering videotape. Here at the institute we watch it often, especially at parties. But this is no time for gaiety. This is a time to get hold of the folks at the Oregon State Highway division and ask them, when they get done cleaning up the beaches, to give us an estimate on the US Capitol.

Unfortunately, the video Dave describes can't be embedded, but go to KVAL and watch it.  Story © 1990 Miami Herald.