The last few posts have been more or less Space News free, although several important things have gone on.  Time for a brief review of what will be mostly SpaceX news.

On Tuesday, November 10th, NASA completed certification of the SpaceX Falcon 9 and Crew Dragon system, removing the last barriers to Saturday's launch of the first operational mission to the ISS, which will carry a crew of four for a regular rotation to the Space Station, twice the crew size of the demo flight over the summer.  Saturday's 7:49 PM launch will carry NASA astronauts Victor Glover, Mike Hopkins, Shannon Walker, and Soichi Noguchi of the Japanese Aerospace Exploration Agency. 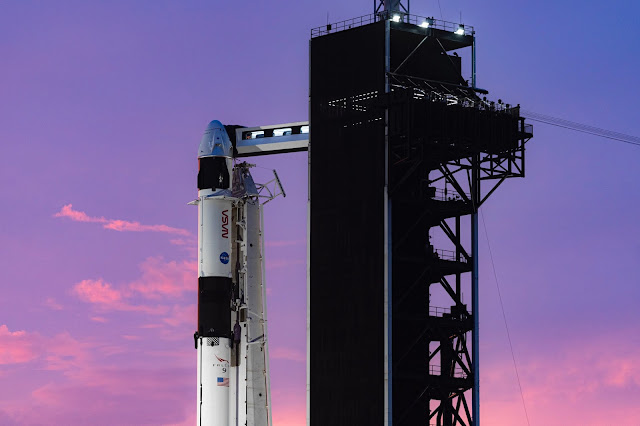 The vehicle is on Pad 39A right now, having had a test static fire yesterday, among the last tests before the mission.  Today, the crew boarded the vehicle for a dress rehearsal.


You may want to fast forward to about 1:45 on the slider.  The engine firing is at about 1:50.  The editing and work on this NASA Spaceflight (.com) video is better, and there's lots more in this video, too, including a second, half-speed replay with the audio shifted in time so that it's more like being there, followed by a third replay at quarter-speed.

You will notice a shower of white hot something or other flying off to the right of the vehicle when the engines are fully on.  They spent a day investigating the engines and report no problems found, saying it was probably some sort of debris left under the test stand.  At the moment, the crew is preparing for a repeat of that static firing test today, which should prove the engines were not the cause.  The road closure is in effect until 9:00PM Central, although I have seen them extend the closure at night.  It's a beach road; not much traffic toward the beach at night.

My favorite explanation for the white hot sparks is that a family of armadillos were flash frozen as the system started venting liquid oxygen onto them, and then were flash fried when the engines started.  Not that it's a true story, just that it's a good story.

The Super Heavy booster is in the process of being stacked, in which the stainless steel rings are welded on top of each other.  I haven't seen an estimate of how close it is to completion.

The highly anticipated test flight of SN8 has not been firmly scheduled but is now looking like it might be toward the end of next week, the last full work week in November.

Finally, the ULA Atlas V launch of a National Reconnaissance Office satellite which has been delayed for months and scrubbed around nine times, is scheduled for tomorrow at 5:13 PM EST from the Cape. That's right, most delayed and scrubbed launch in recent memory is scheduled for Friday the 13th at 5:13 PM. They're showing they aren't superstitious in the slightest.