I Heard Something That Made My Jaw Hit the Floor

I frequently listen to Rush Limbaugh in the afternoons if I sit here at the computer doing stuff.  I regularly mute commercials, but today heard a commercial that was so astonishingly wrong that my jaw hit the floor.  For a few minutes I wondered if I'd had an aneurysm or a stroke, but I could speak and move so I realized it was just the shock of the idea they were selling.

It wasn't exactly a commercial, and it wasn't exactly a public service announcement; the closest I can come is that it was propaganda broadcast.  I've got to say that because of how astonishingly wrong it was, I've thought for hours about whether or not I should link to them.  The announcement was intended to scare people about global warming and there's a video that's very much like it, except that the announcer in the video is a dude and the radio spot was a dudette.  The script is very much like this:


What is the main difference between the Sun and the Moon? Earth has two trillion tons of CO2 that provides a 60-degree temperature difference and a stable environment for life. However, we currently have three trillion tons of CO2 in our atmosphere. This is causing consistent warming and an increase in natural disasters that we are seeing year-after-year.

The group behind the commercial is a place called VoLo Foundation that's here in Florida.  They don't ask for contributions.  They don't tell you buy or not buy anything.  They apparently just want to scare people and get that fear to raise their issue in the polls.

There's so much wrong with this that it's hard to know where the start, but the easiest place is that Earth has a large complex atmosphere, not just CO2.  That 2 trillion tons of CO2 they mention is a tiny percent of the 5.5 quadrillion (5,500 trillion) tons of atmosphere we have.  Most elementary school science books say CO2 is 0.4% of the atmosphere which is close to the 2 trillion tons they quote, so at least that's right.  The latest numbers on concentration of CO2 are right around that 2 trillion ton mark, so their line about us currently having three trillion tons is nonsense.  The moon has a tiny trace of an atmosphere that isn't at all comparable to the Earth's.  The most complex part of the atmosphere is clouds, water vapor, which none of the climate models seem to get right.

The next easiest thing to mention is that Earth has oceans and the moon doesn't.  Hardly news, right?  I mean you've probably heard that 70% of the Earth's surface is water all your life and the folks at VoLo have to know we have oceans.  Water is important to global temperature regulation because the specific heat of water is around five times that of air; again, anyone who lives near the ocean or a large lake knows this.  There's 1.332 billion cubic kilometers of water in the oceans and surface water; I get 320 million cubic miles of water and have seen estimates of 332 million cubic miles.  Tiny compared to the Earth but a big influence.

Earth also absorbs more sunlight than the moon does because of its larger size.  The surface area of the Earth facing the sun is 13.5 times that of the moon.  Do you think the earth might absorb more heat than the moon with 13.5 times the absorbing area and 81 times the mass?  Now you get into differences in reflectivity (what the astronomers call albedo); like that we have high reflectivity ice around the poles because of all that water, while the moon doesn't.  It's a small percentage of the surface area, though. 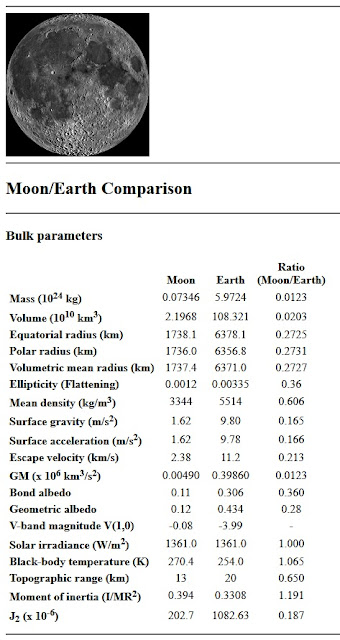 With this many huge considerations they didn't consider, it's hard to consider that VoLo ever intended to be right.  They got close to the average distance of the earth/moon orbit to the sun, they got close to the amount of CO2 in our atmosphere but the rest is nonsense.  It's a meaningless comparison and they're just trying to scare people.