My Two Cents Worth

On the election and the coming few days.

A few weeks ago, Mrs. Graybeard asked me what I thought. I've seen nothing that changes what I thought back then, so it's going to follow here.

I think Trump is going to win. I think the best case, regardless if it's Trump or Biden is for the winning margin to be so big that the planned actions against the winner, as the Transition Integrity Project has been organizing since about the day after the '16 election, won't happen.  Best case would be a replay of Reagan '84, where Mondale took one state; 525-13 in the electoral college.  How are they gonna organize against that?

Unfortunately, I don't see that happening.  That means some amount of crap is going to happen and exactly where you are will determine how bad it's going to be.  This is a wonderful time to be from Washington DC.  Far, far from Washington DC would be best.  No matter what happens the poop hits the air moving device in DC perhaps starting as soon as tonight. whether it's from Government Employees themselves trying to take down the government or professional revolutionaries pushing armed revolt.

John Wilder likes to refer to where he lives as Modern Mayberry.  That's a reasonable description for The Silicon Swamp, but I think of this area in the context of a peculiar country song from 1994, and refer to us as the home of the High Tech Redneck.  We have tons of electronics manufacturing.  In addition to being 30ish miles from the Kennedy Space Center, we have a big name general aviation manufacturer in town here, and a startup company that's working on supersonic passenger jets.  I don't think that the city police or the county Sheriff would stand down like the police in so many of the blue cities have since the George Floyd Overdose Death started the riot season and I don't think the city leadership would request or order them to stand down.  While I suspect that tomorrow there might be open shooting war in Washington DC, my gut says that it will be a regular Wednesday here.

Your situation will depend on where you are.  Any and all of the summer's riot hot spots could flare up tonight and the next few days.  As an example, Wirecutter today posted this Tweet from Denver (as a jpeg, not a link to Twitter).  Denver wasn't the scene of extended riots but that doesn't mean someone won't try to do it now.  The same goes for the blue cities and counties in Florida as much as anywhere else. 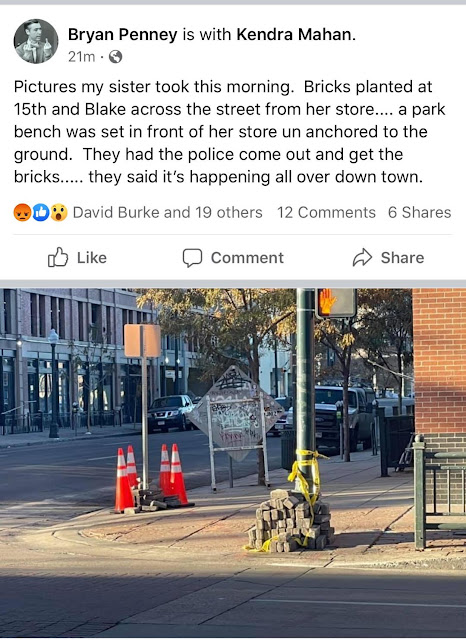 May we emerge after this as a better Republic and on the track of fixing the problems instead of tearing it down and replacing it with a socialist tyranny.