It's A Conditioned Response

President Trump released his early goals for his tax reform.  As predictable as the sunrise or the tides, it immediately was criticized as "a tax cut for the wealthy" and a "giveaway for corporations".  When you hear such things, those translate into two statements that are absolutely true: either the party making them doesn't understand economics, or the party making them knows better and is trying to manipulate you.  I see a lot of both of those happening.

The easiest fallacy to address is the "tax cut for the wealthy".  Dollar wise, any tax cut is going be mostly for the wealthy because they pay the vast lion's share of taxes.  According to the Tax Foundation's 2016 Update,
The top 1% of incomes earned 20.58% of all the adjusted gross income (AGI) reported to the IRS, and paid 39.48% of all the income taxes collected.  Graphically easy to see (Excel spreadsheet from the IRS): 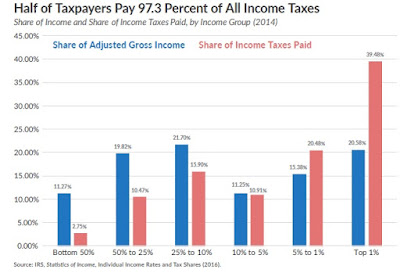 The next complaint is that the proposed reduction of the top corporate tax bracket from 35% to 15% is a "giveaway for corporations".  Corporate income taxes are usually regarded as double taxes, since the same income is taxed once as profit, and once as individual income when distributed as dividends to shareholders.  Since the dollars that made up those sales that turned into profit were from after-tax income from consumers, you could argue that income is taxed three times.  Contrary to popular misconception, the burden of corporate income taxes isn't paid by corporations, but is instead paid by workers, shareholders and consumers.  Corporations act more to collect taxes than to pay them.  People crying to tax corporations are really asking to tax themselves, but few understand that.

Finally a few words on how reducing taxes will "affect the deficit", "CBO scoring", and similar nonsense.  Tax revenues are not the same as tax rates; the two are related, but it has been shown several times that leaving more money in consumer's pockets affects if and how they spend, and cutting rates can increase revenues.  CBO scoring is based on the assumption that spending and attitudes are constant.  Likewise, I don't put the slightest bit of faith in numbers projected for any budget item out 10 years.  I'm not even sure they're even a general guide of what to expect.  I always say to go back 10 years and look at what was projected for now.  They never get it right.

Is it a good plan?  As far as I can tell it isn't a plan, yet.  It's more of an outline for haggling to start.  Will it help the economy?  I don't know.  Some will win, some will loose.  I'll keep an eye on it.